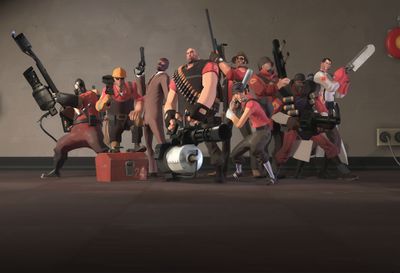 The Random role randomly selects one of the nine classes for you; it can be used when you're not sure who to play, and it's a great way to get familiar with the characters.

Subclass is a term used to describe a set of a weapons a class has that drastically changes the way a class is played. There is currently only one subclass, the Demoknight. Not to be confused with playstyle, a term used to describe a loadout that benefits from playing in a certain way but keeps the core mechanics of a class (such as Trolldier or Gunslinger Engineer). 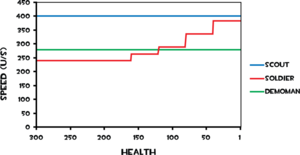 A Demoman wielding the Eyelander, Horseless Headless Horsemann's Headtaker, or Nessie's Nine Iron will gain approximately 7% of his base speed with every kill or "head" taken with it. While charging with the Chargin' Targe, Splendid Screen, or Tide Turner equipped, he moves at 250% of the standard movement speed. The Soldier's speed while wielding the Escape Plan increases by 10% with every loss of 40 health below 200.

In 2017, Drew Wolf, a former Valve design artist, updated his personal website and uploaded some concept art of the female version of the classes created by him.[1] According to the note made by Drew Wolf, there used to be "an internal pitch project" made by Valve "to bring female characters to the cast of Team Fortress 2", and "the goal of the project was to dive deep into possibilities and facilitate creative discussion". However, Drew's artwork does not include the Pyro class, as their gender is still unknown.

A console variable named tf_player_use_female_models was found in the game's source code that is related to the female classes. The console variable would haved modified the loading of player models to append _female to end of the player model filename, for example scout_female.mdl.[2] This is supported by the console variable's description; "For testing. Appends '_female' to the model filename loaded"[3] The only known existing official model of any female class is that of the Soldier. The model was created in 2009 and nothing else came of it. There was also planned to be a civilian class in the game, however it was cut.