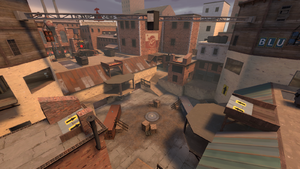 PASS Time is a game mode developed by Bad Robot, Escalation Studios, and Valve. First announced on August 18th, 2015 with the beta release of Warehouse, which later became Brickyard, PASS Time was made an official game mode with the "Meet Your Match Update" on July 7th, 2016.

All of the current PASS Time maps are symmetrical. A neutral ball, called the JACK, spawns near the center of the map. Players must take the ball and successfully score it in one of the opposing team's goals. By default, the scoring limit is five; the team that first reaches this limit wins. Otherwise, the team with the most points wins when time runs out.

At the beginning of the round, after successful goals, or after the previous JACK lays dormant on the ground for a while, a fresh JACK is dropped by the JACK Dispenser at the center of the map, at which point a whistle is blown. The JACK is visible through walls. The JACK may be picked up from the ground, thrown using primary fire, and stolen by hitting the JACK carrier with melee.

Players carrying the JACK, called the "JACK carriers", are unable to use any weapons. The JACK can be thrown or passed to teammates in view via the primary fire button. However, it can be stolen if an enemy strikes the player with their melee weapon. It is also possible to steal the JACK from your own teammate in this way if the player holds it for too long, which is useful in a pub setting to counteract griefers who refuse to give up the JACK. The JACK becomes neutral when it touches the floor after being thrown and resets after some time.

If a visible teammate is in the JACK carrier's crosshairs when throwing the JACK, then the throw will be classified as a "pass". In a pass from one teammate to another, the JACK will rush towards the targeted teammate as if pulled towards them by a magnet, following the teammate around even as they move from their original position. A pass may not be successful, however; despite swerving to avoid most obstacles, the JACK may still hit an obstacle, making it neutral, and an enemy teammate may intercept the JACK mid-pass as well.

If there is no visible teammate in the JACK carrier's crosshairs when throwing the JACK, then the JACK will be thrown only a short distance, which can depend on the user's class. The three "offense" classes — Scout, Soldier, and Pyro — all have weaker throws than the rest of the classes. The Scout's throw is the weakest, the Soldier's throw is only slightly weaker than that of the other classes, and the Pyro's throw is halfway between the Scout's and the Soldier's. All other classes throw the JACK approximately the same distance.

Each team has three separate goals on each PASS Time map: the Throw-In Goal, the Run-In Goal, and the Bonus Goal. A team's goals, located on that team's side of the map, may only be scored upon by an enemy player; in other words, a RED player may not score upon any RED goal.

The Run-In Goal is a wide zone located at the extreme end of either side of the map. As the name of the goal suggests, players are required to run into the goal zone while carrying the JACK to score, since attempting to throw the JACK into the Run-In Goal will result in the JACK bouncing back out without scoring. Alternatively, the JACK may be passed to a player who is already standing in the Run-In Goal.

The Throw-In Goal is a team-colored hole in the wall which is located somewhere between the Run-In Goal and the middle of the map. To score upon an enemy's Throw-In Goal, the JACK must be thrown into the goal.

Several weapons or other equippable items or player conditions have various effects on the JACK.

Each class has a selection of either primary or secondary weapons that are capable of manipulating the JACK at some distance farther than a player’s melee reach. Some of these weapons can only simply move the JACK away from the player, while others can move the JACK in other directions under the player's control. Advantages for manipulating the JACK include picking up the JACK from far beyond melee range, retrieving the JACK from an enemy kill zone, moving the JACK towards teammates or away from enemies when not close enough to pick it up, or moving the JACK to a more defensible position without resetting the dead JACK timer.

The following weapons have no manipulative active effect on the JACK when used:

Under the above conditions that prohibit JACK pick up, the players can nudge or dribble the JACK with their feet. While this effect is generally rather weak, the Demoman seems to have the strongest dribble. A Bonk! Scout generally runs faster than the kicked JACK.

PASS Time has 2 achievements related to this game mode.