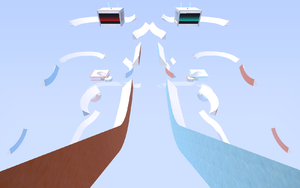 An example of a Surf Map

Surfing is a mod that originated on Counter-Strike, and has since become popular on Team Fortress 2, CS:GO and CS:S. Surfing involves strafing into slanted walls (commonly referred to as "ramps"), causing the player to accelerate rapidly and reach an extremely high velocity. When the player reaches the end of the ramp, their velocity is retained. This allows the player to perform large jumps that would normally be impossible. Surf maps will usually require the player to navigate a series of ramps by performing jumps of varying difficulty.

In order for the player to surf on a ramp and maneuver themself through the air during a jump, sv_airaccelerate must be increased from the default value of 10. Most surf servers set this to 150, trick surf servers often set it to 1000. This changes how fast the player can turn without losing velocity. This can either be changed through SourceMod, or launch options via +sv_airacceleration <number>.

Surf Ramps are slanted walls which a player must strafe against using the A or D keys. This is also how a player must get to the end of a map. Surf ramps can loop, curve or slant in almost any direction. Usually, the W key is never used, because upon its trigger, it causes the player to instantly lose traction with the surf ramp, and thus slide downwards. Surf ramps will often end sending the player flying through the air into another Surf ramp, and through this the player can get around the map, often reaching high speeds. 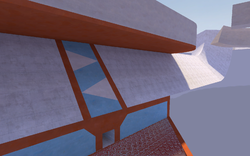 Gaining Speed is important to navigating the surf map. Players can gain speed by sliding down to the lower parts of the ramp while surfing on a Surf ramp, and by falling to new Surf ramps. Certain areas on Surf ramps may provide the player with a speedup, while others may provide a slowdown. These ramps will often come in pairs, requiring skillful navigation to pass the correct one.

BLU and RED Spawns may be as close or as far away from each other as possible. They will often start at a high point of a a Surf ramp, allowing the player to gain a lot of speed before flying to the next ramp. Forgiving maps may respawn a player here if they fall off too early. In most maps you also have 5 seconds protection, when you spawn again after death. This gives you a chance to either kill intruders, or get safely back to the ramps again.

Whenever a player reaches the specified End to the map, a player can usually be teleported to a multitude of places. These places could be the top of jail, where one may be able to score frags, unique locations that contain specific reward triggers, or a variety of other places. Some servers will tell the whole server that the player has reached the end. 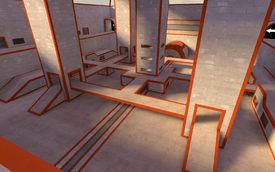 A Surf Jail, this one being Arena based

A notable part of a combat surf map is the Jail. Whenever a player strays away from the surf ramps or falls onto the map floor, they are most likely to end up in jail. Jails can usually be operated in different spots, but are most often situated where the opposing team is able to kill victims, or an arena like area, often in a remote place. Commonly, there is a kill button (that kills everyone instantly or over time) and a free button that opens an exit, allowing players to continue surfing on the regular map.

Skill maps have obstacles to prevent the player from surfing directly to the finish. The obstacles may require the player to keep as much speed as possible, or to navigate through a series of walls via air strafing. Obstacles may include:

†Since bunny hopping to preserve speed is not possible in TF2 without any modification, some developers have created plugins for SourceMod to replicate bunny hopping.

Combat/Death-Match surf maps usually contain Control Points where players can capture and win the round, or the Control Point could be for the gamemode King of the Hill. There are often many 'stopping points' in which there is normal flat terrain to battle on, often also containing control points.

Skill Surf maps are purely surfing, and as such have little or no fighting. Maps greatly range in difficulty and usually contain no "jail" or central region. These maps promote techniques of surfing, for example, to keep speed and quick air strafing. These maps may contain spins, bunny hops, and jumps from ramp to ramp or ramp to platforms. There are 2 types of skill surf maps:

Staged skill maps are skill maps with stages or checkpoints in between the whole surf. The stages may have their own theme and style of surfing.

Linear skill maps are skill maps without stages or stops in between the whole surf. These maps may be as short as 30 seconds, or as long as 3 minutes. You basically surf from start to end, hence linear.

There is a variant called a staged linear map, shown by Panzer in his map surf_eternal. The whole surf itself is linear, but if you fail on one of the "stages", you will usually be sent back to a place where you can either select which "stage" you want to continue on.

Trick Surf is where you surf around the map performing a series of tricks. Tricks may include surfing backwards or sideways, wraps, or a series of jumps and air strafes. A "wrap" is where you wrap around a segment of a surf ramp one or more times. The skill level of trick surf can be compared to skill surfing, but the skill varies around each trick.

The Way to find Surf Maps

Surf maps can easily be found. When you open up TF2, you have to go to Servers, and write "surf_" down in the Map section. There's a lot of different maps to choose, and some of them are more surfing than others. But when you have found the one you like, you simply connect to the server and choose a team.