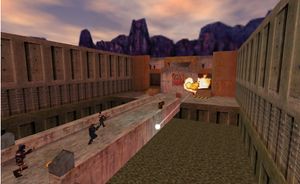 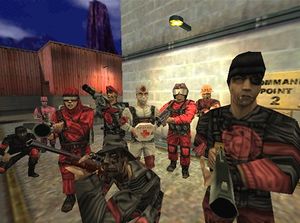 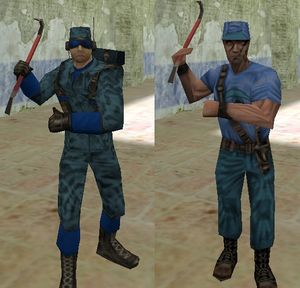 The Demoman (also known as Demolitions Man) is armed with a Grenade Launcher for indirect fire onto enemy positions, and a Pipe Bomb launcher for booby-trapping places as well as being equipped with a demolition pack capable of opening or closing certain routes on some levels.

The Medic (also known as the Combat Medic) is equipped with a super nailgun, concussion grenades, and a medical kit that can be used either to heal teammates or expose opponents to a contagious infection that drains health. Unlike the Team Fortress 2 Medic's Medi Gun the medical kit acts as a melee attack that, on hit, will apply a flat amount of healing or a contagious infection depending on the target's team.

The Heavy Weapons Guy (also known as the Heavy or the HW Guy) is armed with a powerful Minigun and can sustain more damage than any other class. However, the Heavy is significantly slower than other classes.

The Pyro (also known as "pyromaniac") is equipped with a flamethrower and an incendiary Rocket Launcher, both of which can set enemies on fire. The Pyro also carries several napalm grenades for the same purpose.

The Civilian (also known as The Hunted or V.I.P.) is a class only available in the VIP game mode and serves as the objective. Armed with the Umbrella, his role is to reach an evacuation point without being killed, with the help of his team.

The Bodyguard are only available on the Escort game mode, the role of the class is prevent the Assassins from killing the Civilian and let them reach the destination.