I say center the picture at the top like it was, it just brought the page together better. — The preceding unsigned comment was added by Amp32 (talk) • (contribs)

It seems pretty clear that for Nov 10, they're basing the cycle off of Midnight UTC, as oppossed to Midday UTC. I say this because the patch came in to begin the event at almost exactly Midnight UTC. Maybe we should change the information as listed?

Should also remove times that start at exactly midnight because that's ambiguous as hell. No sensible person lists midnight as a time because of the potential for confusion. Even if you have to put it a second before or after, do it.Shoegays 11:29, 9 January 2012 (PST)

Full Moon Feb 12 2014 has started earlier than specified too (noon Feb 12). I wasn't around to confirm if it started at midnight instead of noon, but it is definitely active now, and the time is currently only 4:30am UTC. Is it possible they move one back 12 hours periodically, to stay more in line with the true lunar calender? [Himinow]

Will the HHH and MONOCULUS appear on a Full Moon?--

No, unless the map is the Halloween version of the map. (Mann Manor and Eyeaduct, NOT Mountain Lab or Viaduct) TheIgnorantMedic 07:21, 2 June 2012 (PDT)

While I've equipped all of the Halloween sets during the Full Moon today, including the Soldier, I can't seem to get any robot voice responses from him, nor have I seen him do his robot taunt. His battle cries are the default, for example. I've seen the Heavy and Demoman's taunts and the Engineer's voice has changed, it's only the Soldier I can't get any reaction. I've tried variations of Haunted and non-Haunted miscs, I've tried different weapons, and nothing's working. Is this happening to anybody else? Blazios 11:01, 9 December 2011 (PST)

Well, it doesn't seem to work, in Itemtest at least. But neither does the Engineer's voice change, so it's possible that I'm doing it wrong. Sven 11:22, 9 December 2011 (PST)

Despite the background saying it's a full moon, I couldn't get any of my halloween stuff to show up either. It might have to do with the server clock. Balladofwindfishes 12:34, 9 December 2011 (PST)

I posted it here because I didn't want to add it to the article if it was simply a problem on my end and not with the game. I did find a thread on the forums where someone else is having the same problem, though I can't reply yet (waiting for activation, should've joined ages ago). I tried this again after the update just in case, still nothing. Am I right in saying that if this is a bug, it should be added either here or on the item sets' page? Blazios 17:04, 9 December 2011 (PST)

It seems that a lot of people are having issues with the costume effects (some can't get the Demoman to howl either) but I've yet to find someone whose Soldier taunt is working, so you're probably right. » Cooper Kid (blether) • (contreebs) 06:30, 10 December 2011 (PST)

I can confirm the Tin Soldier set doesn't work on my end, however the items do show up. Balladofwindfishes 06:42, 10 December 2011 (PST)

What about the current full moon?

Either I'm an idiot or the page doesn't say when the current full moon started and when it finishes. It's all well and good knowing we're in a full moon phase right now, but I'm sure I'm not the only one who is interested to know how long it lasts for. Just a suggestion :) And if it IS already there then it needs to be put somewhere clearer. Maybe next to the "We are in a full moon" text in the form of "We are in a full moon until XX:XX GMT" hope this makes sense! Casperr 09:16, 8 January 2012 (PST)

Its a full moon where I am, not a new moon.

Should we mention the server has to be restarted for Full Moon to take effect? It's a question I see often "it's a full moon, how come the costumes don't work?" so it might be good to mention that costumes will only show up on servers that have been restarted since the full moon started. Balladofwindfishes 05:53, 7 March 2012 (PST)

Do map changes with either changelevel or map count too? The latter technically restarts the server. i-ghost 06:52, 7 March 2012 (PST)

Does the full moon show up in a default map's skybox? I've seen this a few times now, but I want to be sure it's normal. (I couldn't see it on my old computer. CURSE YOU!)

I think the moon is visible in koth_harvest_event and ctf_doublecross, but it doesn't change phase. ==Fax Celestis talkcontribhome 09:16, 21 September 2012 (PDT)

Ok, thanks! I saw this in a few videos, and the commentator called the map "pl_badwater", which doesn't sound like a different version. Must of been anyways. Alloid 12:22, 21 September 2012 (UTC)

There are some variant "night" maps floating around. Might've been pl_badwater_night. Regular pl_badwater doesn't have it though. ==Fax Celestis talkcontribhome 15:47, 21 September 2012 (PDT)

The Characters on the main menu screen don't always appear in their Halloween costumes. Just wanted to clear that up a bit before I edit. --Aronius Two 09:15, 27 October 2012 (PDT)Aronius_Two

Full Moon is not working

All weekend we've been in a full moon, yet the page says we're not in one. I added a last full moon which happens to show that we're currently in a full moon. This seems to be programming that's beyond general wiki user input. Can this be fixed? Liquidefeline 13:36, 25 February 2013 (PST)

Confirmed this full moon. This page is broken and I have been unable to find out which piece of code writes the text saying whether we're in a full moon or not. Liquidefeline 22:33, 25 March 2013 (PDT)

(Not only have I been away from TF2wiki for most of 2 years, I have neglected my yard for the same period. Yesterday, I shoveled wet dirt for 7 hours. So, I am taking it easy today.)

Today, I ran a study of the present performance of the Full Moon notification functions.

I set up and used a long sample of Full Moon dates generated by Template:Fmc2. This sample commenced with the 2017/04/11 Full Moon and covered 81 Full Moon cycles (about six and a half years into the Future of TF2). I can provide or upload the sample on request. (Why am I thinking out the words of this report with Eugene’s voice in my head? (Oooh, this is bad!)) 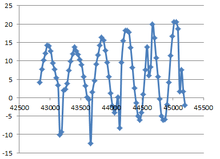 That is quite a bit of swing, and with the sinusoidals, no correcting with low order polynomials, but I think I can easily apply a zero order offset of a few hours. But, the very limited feedback I have on operation is that early annunciation is preferred to late, so I could leave it as is. The discontinuities are probably the 12 hour offsets built into the original templates and may bear some investigation, but they really don't introduce error beyond the sinusoids. Mikado282 (talk) 18:56, 9 April 2017 (PDT)