From Team Fortress Wiki
Jump to: navigation, search
This article is about the geographic maps of the Badlands area seen in the Shadow Boxers comic. For articles other uses, see Badlands (disambiguation).

Badlands maps (Shadow Boxers) are the maps Miss Pauling and the Mercenaries are studying in the Shadow Boxers comic. In that story, these maps represent areas where the Mercenaries have recently fought Robots and where they are expecting further attacks. In short, these are maps of areas in or around Badlands, New Mexico, which is the main area of Mann Co. operations. Hundreds of Mann Co. facilities are located in Badlands.

As illustrated in the previously released Map of Badlands, much of the geography of the Greater Badlands Area is referenced to the geography of north central New Mexico. For example, Badwater Basin is an Australia-shaped basin in a location corresponding with a actual caldera in a mountainous area of New Mexico. The two Shadow Boxers maps confirm this location with much greater but still limited detail.

On page 4 of the Shadow Boxers comic, two maps are readable; a Top Map depicting highways, rivers, and settlements of the fictionalized Badlands area, and beneath that a Covered Map largely depicting the Santa Fe National Forest and surrounding reservations. Both maps depict actual New Mexico and fictional Badlands geography. However, map details and text are blurred or masked and colors are reduced to shades of turquoise.

To the left of and partially obscured by Spy’s shoulder, partially covered by the Top Map, and oriented with north towards the left; the Covered Map is a stylized map featuring certain forests, preserves, and reservations of north central New Mexico. The perspective is comparable to viewing Map of Badlands from the northeast. Several real geographical features are recognizable on this map by general outline:

Several additional lines and smaller darker shapes are visible that have no correspondence to real locations and may indicate fictional Team Fortress 2 locations or Mann Co. properties.

The Top Map is an illustration of the geography of the extended Badlands area covering a span some hundred plus miles north and west of the Badwater Pipeline, with Miss Pauling standing to the north on page 4 of the Shadow Boxers comic. On page 5, a closer view of the same map is given. On page 4, Miss Pauling is pointing directly at the highway junctions of the actual Cuba, New Mexico (around which are several abandoned cliff-face coal mines of the sort seen in Meet the Director and The Showdown[1][2]).

Several of the lines on this map correspond with highways and rivers of northwestern New Mexico, although their courses may be interpreted differently in the Team Fortress 2 geography:

Several small darker shapes seen on this map as well as some fewer larger darker shapes with unreadable rectangular labels have no real world correspondence and may represent Mann Co. facilities, Badlands communities, or other fictional geographical features. 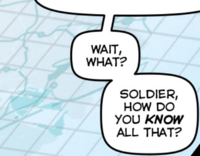 Detail of the Top Map.

The Top Map appears again on the following pages in closer detail with focus drawn to a location relatively central to the Map of Badlands. Visible in both views of the Top Map is a particular, labeled, but unrecognizable feature, and nearby is a line following the short route of NM 16 ending in a fictional shape near the lake.