From Team Fortress Wiki
Jump to: navigation, search
This article is about the "Greater Badlands" region where much of the Gravel War takes place. For other uses, see Badlands (disambiguation).

The Badlands Region encompasses a central valley surrounded by several forested mountain ranges. Most of the larger population centers are within the central valley; but smaller settlements, valuable resources, and key facilities are located in the mountains and beyond. To the west and northwest lies a major river, navigable to ocean-going vessels.

The term badland normally refers to an area where thick deposits of soft rock or soil have been deeply eroded. Such areas are generally an impediment to transportation and unsuitable for agriculture. Often Badlands are in arid or desert climates.

Much of the region is arid and largely devoid of vegetation. However, there is a broad fertile valley from Well to Teufort. This valley is bounded in places by forested mountain ranges; the Thunder Mountains to the Northwest are high enough to achieve an Alpine environment.

While much of Badlands is soil-less, there are areas of significant agricultural production, notably in the northeast around Teufort. Major red wheat and blue corn crops are handled for ocean export through the large, modern facilities at Granary.

There is considerable mining of coal, gold, and other minerals. Operations include those located at Badwater Basin and Dustbowl. 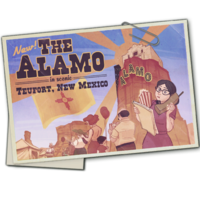 The Alamo, won by Saxton Hale in a poker game and relocated to the Badlands.