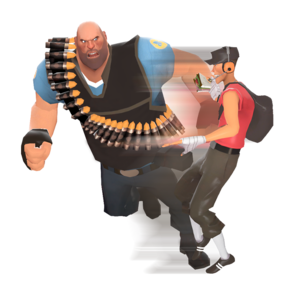 Strafing is moving laterally to the direction you're facing. This is one of the best ways to dodge enemy fire, move unpredictably, and watch multiple directions while moving in a straight line.

There are several notable forms of strafing. Circle strafing is moving continually around an opponent, making you difficult to track. Jittering refers to strafing rapidly over a short distance, making it difficult to judge your position. Finally, air strafing is a form of acceleration that allows you to move laterally in the air.

To circle strafe is to move around your opponent. The technique is performed with the left and right strafe keys in combination with the mouse holding your aim on on the target. When combined with jumping, it can make oneself quite difficult to hit.

If your opponents have poor aim, poor mouse sensitivity, or lose track of you, you will have the opportunity to shoot them easily while dodging their fire. Projectile attacks will have to lead your motion. Sentry Guns cannot lead. MONOCULUS can lead somewhat when angry.

Tap the left and right keys very rapidly, with slight variations in rhythm. This will cause you to jerk side to side, encouraging opponents to fire outside your position as they try to aim ahead. This technique sounds ludicrous in theory, but in practice, you will be more difficult to hit with any hitscan weapon.

Air strafing is the technique of combining the strafe keys and mouse movements to change your direction in mid-air. Its primary use is to reach a destination that is hidden around a corner or barrier, but it also slightly increases the velocity of the player and can be used to dodge aerials and avoid successful juggling.

Players who use any of the default movement keys while in the air will produce a short impulse in that direction. This is what allows players to arrest mid-air motion or move a small amount after being knocked into the air. The acceleration is capped or else the player would accrue airspeed while holding or tapping the movement keys.

Here are the practical steps:

You will accelerate a little bit and curve through the air in that direction. If at any point you press the forward key, back key, or turn in the opposite direction of your strafe key, you will cap out your acceleration, or stop dead, and end your air strafe. Make sure to release the forward key (default W) whilst airstrafing.