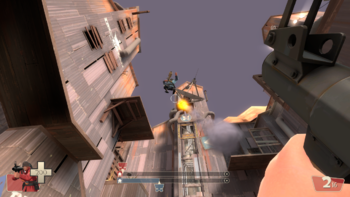 A Soldier hits a rocket-jumping Soldier in mid-flight to prevent him from gaining any more height.

An aerial, also known as an air shot, midair, or middy, is when a player shoots or kills an enemy that is airborne. This is used as an area-denial tactic that can be utilized by almost any class to prevent enemies from gaining height, or to throw the enemy off course and make them easier targets. The knock back from this attack will deny that player any more vertical or horizontal advancement, and disrupt the opponent's flight, making them an easier target.

Due to the slow projectile speed of the Soldier's Rocket Launcher, landing accurate aerials can be difficult. Successfully hitting an airborne target requires the player to know where the enemy will be when the rocket reaches them. Because of this, in order to land an aerial as a Soldier, the player will need to have good timing, and be familiar with the projectile speed of the Rocket Launcher he/she is using.

Aerials are a crucial aspect of one of the primary weapons available to the Soldier - the Direct Hit. This alternate primary weapon mini-crits targets that have been launched into the air via explosions, enemy attacks, or grapples. The faster projectile speed of the Direct Hit, as well as that of the Liberty Launcher, is an extremely useful tool for successfully landing an aerial.

Flare Gun aerials offer the ability to ignite enemies and perform critical hits on targets that are already burning as the enemy is hit. Since enemies will be on fire upon landing, players equipped with the Axtinguisher can follow up the Flare Gun aerial with a guaranteed critical hit. If there is any water or a Health kit nearby, your enemy will probably attempt to land on or in it.

The Reserve Shooter scores mini-crits on targets that are airborne due to any sort of knockback (e.g. not jumping) excluding airblast, allowing Pyros to shoot blast jumping enemies for extra damage.

The Grenade Launcher and Stickybomb Launcher both fire their respective projectiles in an arc. While the Grenade Launcher is similar to the Rocket Launcher in terms of stats and function, the arc that the projectile makes as it fires through the air can be much harder to compensate for, and can take a player time to learn the difference between the two. The grenade projectile travels at approximately 1065 Hammer units per second, and will detonate under two circumstances; either on direct contact with an enemy or after a set interval.

While a bit more difficult to fire in time than the grenade, it is quite possible to perform aerials with a Stickybombs by detonating them in mid-air. Stickybombs do not need to make contact with an enemy to cause damage, and have powerful knock back.

Despite their power, the Stickybomb Launcher projectile is quite slow, and a Demoman being faced with a fast-approaching enemy would be better off using their Grenade Launcher. If an enemy has closed the gap too tight, a Demoman would be better off using their melee weapon to attack, as the explosive radius from either their primary or secondary weapon would deal a lot of damage to the user as well.

With the Wrangler, an Engineer is capable of utilizing the rockets from his Level 3 Sentry Gun to perform aerials. Similar to the Soldier when using the Rocket Launcher to stop airborne enemies, watch their trajectory, and wait for your enemy to begin their descent, aiming your shot to strike where they're going to land. As with any other more advanced maneuver, practice is key.

The Wrangler offers a benefit that the Rocket Launcher and Grenade Launcher lack: a laser sight to assist your aim. With the Wrangler's laser, you can always tell where your rocket will go before you fire it. Be aware that this laser is visible to the enemy as well.

The Sniper Rifle's headshot can be used for performing aerials. Typically, one shot will prevent an enemy from closing in on a Sniper from above. A Sniper Rifle shot does 50-150 damage on a bodyshot, and 150-450 on a headshot. A single shot won't just stop their advancement, but may also cause them to retreat or outright kill them.

A useful technique for shooting Scouts would be to watch their jumps, and note when a Scout leaves a smoke trail behind his feet. This is a visual representation that he has used his double jump ability, and will be unable to dodge your shot unless they perform a strafe. Ready your shot for where your enemy is going to be by letting them fall into your scope instead of trying to follow them with it.

Successfully performing an aerial with the Huntsman, however, is different in that the power and arc of the arrow projectile depends on the length of time it was initially charged. This can cause slightly unpredictable projectiles, a shallow flight path, and increased power in comparison to the Sniper Rifle. A single fully-charged arrow to the mass of an enemy can be enough to kill a medium-heavy class, such as the Demoman or Pyro. If the arrow does not kill them instantly, the damage they've taken may be too much to survive upon landing from their height.

The Backstab and Blast Jumping mechanics of TF2 can be used to perform aerials. Unlike aerials of other classes, an aerial for a Spy consists of the Spy being launched into the air by an enemy's damage knockback (Such as a Soldier's rockets) and then stabbing an enemy mid air.

As an aerial shot is meant to put the opponent in a position in which he is unable to protect himself from incoming projectiles, learning how to counter an aerial can be crucial to surviving. Though one is able to take the damage in a way that may propel them to shelter, they will have difficulty avoiding a follow-up shot with their back to the enemy. Another tactic is to reverse your position with them by strafing your way to equal ground, and propelling your opponent in to the air with your own weapon, when using this tactic, be careful of enemy teammates around the area.