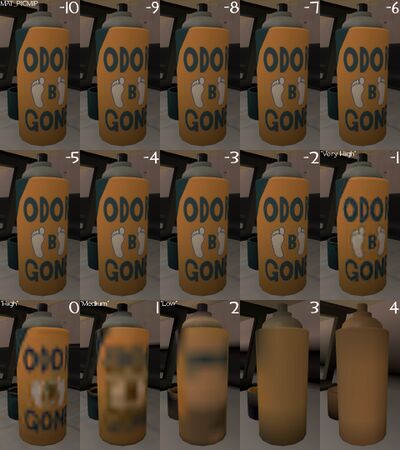 Ultra high settings are "hidden" graphic settings which cannot be enabled through the game's menus. Because enabling all of these settings can cause heavy GPU and CPU usage, their use is mostly suited to screenshots and machinima.

Some of the below settings may require the command sv_cheats 1 to be enabled.

Setting no_texture_stream in the autoexec.cfg file or in Steam launch options disables Texture Streaming. Disabling Texture Streaming forces the game to load high quality textures of an object. This makes skinned weapons appear sharp and clean the second they appear. Texture Streaming was added in the Tough Break Update. Its purpose was to maintain support and performance of older systems. It also helps load the game faster as it loads or "streams" textures on the fly as they appear. A side effect of Texture Streaming is that certain textures will appear "blurry" or "low quality" for the first few seconds of them being in view. This mainly affects skinned weapons, and the Engineer's blueprints that appear when using the build tool.

mat_picmip was the most well-known settings and had one of the biggest visual "gains". This setting used numbers ranging from -10 to 4, -10 being the best quality and 4 being the worst. See the comparison image above.

As of the June 10, 2010 Patch, mat_picmip is locked between -1 and 4, corresponding to the settings which have always been available in the game's menu under the "Texture detail" dropdown. This was done to address "significant performance and instability issues" for some users.

The reason why some textures could see vast improvements in quality is because with the initial release of the Orange Box, Valve added a resource data system to the Valve Texture Format, which could be used to set the "default" quality of a texture to a lower mipmap level. This means that an offset can be induced at the baseline quality level (mat_picmip 0 is the highest), and mat_picmip -1 ("very high") will make textures go one mip level up if they are set to be using a lower mip level in the VTF — which is the case for some of TF2's world textures, and most of its very small props, for video memory optimization purposes. 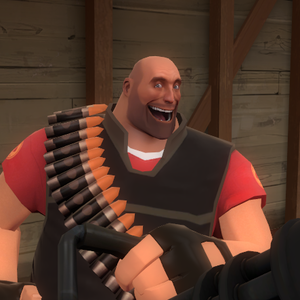 An example of HWM models.

Setting mp_usehwmmodels and mp_usehwmvcds to '1' enables the hardware morphs versions of the player models, as seen in the Meet the Team videos. This makes player models more detailed and gives them more realistic facial expressions. It does not work for the Pyro, and none of the models will have their heads colored when covered in Jarate (doesn't count for Pyro).

Note: as of testing these cvars and using "developer 2" to print loaded models to the console, these cvars appear not to work anymore. Instead, the game always loads non-hwm models now (as of 3/15/14).

Setting cl_burninggibs to '1' will cause the gibs from players who are killed while on fire to display fire effects.

If cl_new_impact_effects is set to '1', Source Engine's updated, threaded particle system (as opposed to the original engine's system) will be used to render bullet impact effects. The results are most noticeable on glass.

By default (r_lod '-1'), the game lowers the level of detail on objects at a distance from the camera to save on framerate. Setting r_lod to '0' disables this, forcing the game to always display the highest detail version of each model.