From Team Fortress Wiki
Jump to: navigation, search
For the similarly-named weapon used by the Sniper, see Machina. 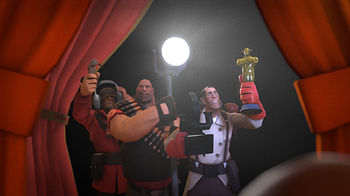 Machinima (machine/cinema) is a filmmaking genre in which a game's assets are used in order to produce a video that has a film-like experience above and beyond standard in-game footage. While the exact history of machinima is unknown, its origins trace back as far as 1996, with the Quake film Diary of a Camper being regarded as the earliest viral machinima film. Its peak, however, came with the early years of YouTube, often cited as a current-day nostalgia factor for those who were active during the time. Typically written as comedies, machinimas can ultimately be used to create any genre of film. The techniques vary depending on the game's resources and the machnima's creators; some films will use animation techniques, whereas others may rely on capturing in-game footage and overdubbing audio to match. The latter method usually does not resemble typical gameplay, as rather than competing, players act out a scripted scene. VALVe games are popular choices for machinima creators, owing to a combination of the vibrant characters, strong art design, and easily-manipulated game assets.

The Meet the Team videos produced by VALVe are good (albeit atypical) examples of machinima. They are animated using the game engine, but feature specially-written animation sequences and high quality settings which cannot be accessed in-game (without the use of console commands), along with the original voice actors. More standard, fan-made films can vary in quality. Arguably the most popular video, Counter Strike for Kids, acts as a mean for video quality, blending standard gameplay footage with greenscreen effects, basic text overlays, and post-processed dialogue.

Due to their non-canonical nature, machinima videos are often at liberty to change plot elements, character traits, location details, and more. Details about the game world are often overriden by the machinima creator; despite using the same character model, for example, a character could be given a different name and behave in different manners than presented in the official game media. Apart from machinima referring to the act of using a game's assets, the technique in which a movie is produced is just as wide and as varied as standard filmmaking. As an example, a popular technique for machinima is stop motion. A technique not normally associated with simulated 3D character's and objects.

Common tools for making Team Fortress 2 machinima include (but are not limited to) Garry's Mod, Source Filmmaker, and Source Demo Recording.

Machinima may also refer to the YouTube network of the same name, which centered around these films. The company was founded in January 2000 by Hugh Hancock, and acted as a primary source for a variety of different machinima series. The channel abruptly stopped functioning in January 2019, setting a vast majority of their videos to private. Ultimately, the resulting loss measured in thousands of iconic early-YouTube videos and over five billion views. This includes the aforementioned Counter-Strike for Kids, the most-viewed fan-made film on the channel at over 17 million views at the time of its privatization. A month later, the channel would officially go defunct, merging into WarnerMedia subsidiary Fullscreen.