From Team Fortress Wiki
Jump to: navigation, search
This page tells you how to use Oculus Rift's Development Kit. For information about Virtual Reality itself, see Virtual Reality. 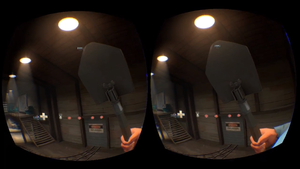 These are not useful for actual play, but may be interesting for developers to show some of the differences between VR and non-VR rendering modes.

OpenAL, which Linux uses for 3d positional audio, has a little known HRTF feature. This distorts sound using pre-measured responses to how sound changes when it bounces off a human head, relative to where it's positioned. Enabling this feature makes sound, when using headphones, appear as though it's actually coming from the object it originated at in 3d space. Example

Unfortunately, for the moment, the version of OpenAL that Steam uses is not recent enough to take advantage of these features, as it was introduced in >=OAL1.14. To use it, you can either use a local runtime, or simply make Steam use your system's OpenAL for games. Here's the instructions on how to do the latter on Ubuntu and Arch Linux:

Finally, once that's set up, we can enable OpenAL's HRTF functionality.

This will enable this functionality system-wide. There is currently no way to control this setting on a per-application basis.

Currently, by default OpenAL only supports HRTF in 44.1KHz. To make sure it works, ensure that your card is running at 44.1KHz, or manually set the frequency for OpenAL like so:

Unfortunately, we still need to turn off TF2's own software 3d sound, to let it fall back on OpenAL. There are some options to do this:

And that's it! It should now be easy to tell if sounds are coming from in front of you, behind you, above you or below you, and from roughly what distance.