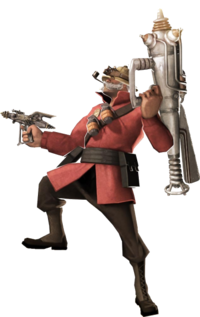 COMPLETELY irrelevant to the wiki altogether, but you are the helpful kind of guy. I need a modeller for my hat idea. I have tried Facebook, Polycount, Facepunch, and my posts just get removed, even when in the right areas. I don't suppose you know of any do you? Yeah, sorry for not being on topic. Taser9001 07:51, 12 June 2012 (PDT)

I'm afraid I can't really help you there - 3D modelling is something I've been meaning to have a look into myself as I've done a bit of it at school, but I've never yet found the time. The biggest problem isn't really finding a modeller (anyone can learn to use a modelling program, and your ideas are best implemented by yourself) but finding the right modelling program to use. I've heard 3DSmax is a good one but it's an industrial program so is quite expensive. I'd suggest asking on the forums to see if anyone can recommend a good program - and if I find out anything more myself I'll let you know. » Cooper Kid (blether) • (contreebs) 16:49, 15 June 2012 (PDT)

I understand your point on older discussions generally being disregarded by most people, and I don't do this for fun... but wouldn't it be acceptable if the discussion at hand was important (read: archive worthy) in the first place and is likely to be read by anyone despite being old? I considered doing as you said before this whole thing even happened; starting a new topic and linking it to the old. But in some cases, I think some important discussions are made to last, especially if they're unfinished/unanswered (a to-do/to-test list being a prime example). I do suppose I'm not one to change the wiki's policies, but wouldn't you agree? —BobMathrotus (talk) 14:14, 9 July 2012 (PDT)

You're absolutely right about that discussion still being relevant and I can completely understand why you thought it would be better to continue the old one, but the fact is that it was almost 2 years old, and as the subject involved testing fairly crucial aspects of the weapon, it's reasonable to assume that they've been done. The original poster hasn't even been online for over a year.
The bottom line is that people don't tend to go back and read old discussions. Theis one sadly is unquestionable proof of that; only 2 people replied, neither of whom actually asnwered your question, which indicates that none of the editors involved with weapon testing and weapon demonstrations even saw it. » Cooper Kid (blether) • (contreebs) 15:36, 9 July 2012 (PDT)

Well, since I'm new to the wiki, I can't say I know long it takes to get an answer when the page itself is pretty old and stagnant (Valve hasn't touched L'Étranger in forever, so there's really no need for anyone to watch that page), but I reckon my post wasn't that old yet, and odds are someone would've answered eventually. As for assuming they've been done... I'm not sure why you would assume that, the list clearly said two of the tests were "Not done". I'm not going to lie, the original poster not being active anymore is something I was kind of expecting. However, I didn't specifically want HIM to answer. Anyone could have; this is a wiki! In the same regards, his list was left undone; anybody could finish it - just like anything on any wiki, it's a group project, after all. That's why I figured I might as well add to it (don't get me wrong, had I owned L'Étranger and known he was inactive, I would've tested it myself and edited that list to include the information, and even do the remaining tests - though you probably wonder why I even asked that if I don't own L'Étranger; well, to keep it simple, I just can't stand a wiki that's missing information, even seemingly unimportant information! That and curiosity; I have an unusually strong interest for random, nearly-useless trivia - knowing whether L'Étranger works on disguised spies would fall into that.)

You're probably not one to change the wiki's policies either (I don't know how much power you have... nor if you're even an admin), but one should ponder, isn't the point of a wiki to be constantly growing and perfecting itself due to the sheer amount of people working on it? I don't think it's ever too late to answer something. New people will always be joining, and what may seem old to you may be completely new and interesting to newer members.

Anyway, long story short: I respectfully disagree with you. I don't think my post was old enough to safely assume that nobody would have answered, and I don't think it's reasonable to assume those tests have been done. I can barely even agree on your claim that people don't read old discussions; hell, all you have to do is look at the talk page's history or the wiki's recent changes page. What section the new message is in is automatically included in the summary; it shouldn't be hard to find it from that point. Then again, maybe I'm unknowingly ranting about laziness being part of human nature (/headache). —BobMathrotus (talk)

Uh... you answered my question on the discussion of the scattergun. Was that appropriate for the discussion? I dunno, and you seem like you know this hand like the back of your wiki. A lot of people seem to like you, and I do too. GeneStealer 08:20, 13 July 2012 (PDT)

Oh geez. What was wrong with the trivia in meet the medic? Is it not fact enough, intriguing, interesting or good enough? I pointed out things that might have been hard to spot (not the armored authority, but jumper's jeepcap at least.) How can you expect new editors to learn if all you 2 year veteran editors keep undoing edits without giving a proper explanation? — The preceding unsigned comment was added by Hoboharry (talk) • (contribs) 00:51, 17 October 2012

Sorry about that, I tried to be a little more specific in my edit summary. In a nutshell, something purely observational (i.e. something that can simply be seen in the video) doesn't count as trivia. The fact that those hats are there has been added several times in the past, and it's always been removed.
Take a look at the Trivia Style Guide for some more info. » Cooper Kid (blether) • (contreebs) 17:03, 16 October 2012 (PDT)

I guess you could say I'm hell-bent on getting rid of unnecessary templates, because they slow down the wiki (it takes longer for the script to generate the page that you see). rZ 13:46, 25 October 2012 (PDT)

Hey there. Can I ask that you subst your signature in the future, as there are long term issues with users transcluding their signatures. Thanks. —

I see you fixed it! Generations to come for millennium shall benefit from what you have done today, I salute you! — The preceding unsigned comment was added by RobTheStarCollector (talk) • (contribs) 21:00, 12 September 2013

Hat and Misc of the week templates

Allo. Since there is no longer a real hats or miscs distinction in the game anymore, could you merge these templates into a single template in anticipation of merging the hat and misc articles? Also preferably named something like 'Featured Cosmetic', as the current names give the wrong ideas. Thanks. —

Hello, I'm sorry about the covered wiki movement thingy. I was thinking about nominating the sydney sleeper when I saw a link to the "covered" page. when I went to the link I saw it needed to be moved to soaked page, (at the time I forgot to read the whole disscusion thing...I'm so stupid) I wanted to help move the page so I copied the page with some minor editing from "covered" to "soaked". DrewPDrawerz (talk) 14:02, 17 January 2014 (PST)