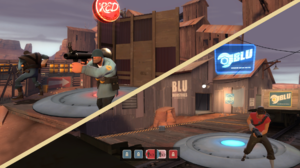 The BLU team attempts to capture a control point while the RED Scout back-caps the midpoint.

Backcapping is the procedure of capturing an enemy control point on a five-point Control Point map while one of your team's points is being captured.

Backcapping is most effectively performed by Scouts and Spies given their speed and elusiveness, respectively. It is still viable to back-cap with other classes.

Backcapping can be a considerable risk, but if it is successful, it will also reap significant rewards. If your team successfully back-captures a point, it will give your team significant gained territory as well as cut the enemy team off from reinforcements. If your attempt fails, which it often will, your team will be without one potential player that could change the direction of a fight.

There are four different back-cap scenarios; two while your team is on offense, and two while they are on defense. While on defense, you might capture the middle point while your second point is being captured, or you might capture your second point while your last point is being captured. Since control points take more time to capture the more central they are Control Point timings, a defensive back-cap is hard to pull off.

By contrast, a back-cap while pushing aggressively is easier to pull off. There are two such scenarios: Capturing the enemy's second point while they capture middle, or capturing their last point while they re-capture their second. In the former scenario, the player or players who made the capture may often push onto the last point and make an attempt at it. The latter scenario is often tricky to pull off, since the last point is so crucial; a few players may be left back to defend it.

Scout-capping is considered the standard back-cap technique given the Scout's focus on capturing points. The Scout has the speed and capture rate to make backcapping successful in many situations. In addition, this speed can be used to escape if a back-capture goes wrong, or just to evade any defenders. With Bonk! Atomic Punch equipped, the Scout can slip past enemy lines and, if left unchecked, pose a significant back-cap threat.

Soldier/Demoman-capping is generally only viable with the Pain Train equipped, as it gives the user 2x capture rate much like that of the Scout. Soldiers, and Demomen can use their explosive jumping ability to get past defenders or onto difficult access points. Additionally, both classes have good offensive capability and are able to defend themselves during a back-cap, but will take more bullet damage with the Pain Train equipped. Demomen and Soldiers can travel large distances very quickly with the Sticky Jumper and Rocket Jumper respectively.

Spy-capping is the act of infiltrating the enemy base as Spy and capturing a point the moment it unlocks. While the Spy only has a 1x capture rate and is relatively weak, it is much easier to get behind enemy lines as a Spy and get into position. This works particularly well on Attack/Defend maps given the ample hiding locations and the standard difficulty of breaking enemy lines. This is often done on the final point due to quickest timer compared to other points on most maps.

The Cloak and Dagger is useful because of the infinite Cloak capability, but enemies may Spy check in anticipation of a Spy-cap. The Dead Ringer is also useful in that it makes getting behind enemies lines much easier, but provides little hiding ability.

Spy-capping can be quite powerful, but is easy to counter if the defending team thinks it may be tried. All it takes is one player to Spy check the final point and a potential round-winning capture can be averted.