A demo recorded for Team Fortress 2 captures the following:

There are limitations to note when recording a demo:

This procedure will create a short demo on a private server. 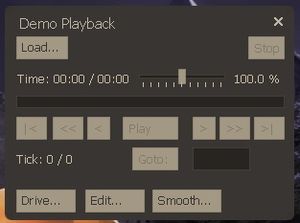 This procedure will load the demo recorded in the Recording tutorial.

The Source Engine can generate audio and video files based on a recorded demo. The output audio and video can then be processed through video-creation software. The following procedure will generate output called mymovie based on the demo file created in the Recording tutorial demotest.dem. If you are making a High quality video for in use in a Machinima you can use ultra high settings for an added graphical boost

These files can be combined into a single movie file by using software such as VirtualDub, a GNU-licensed video capture / processing utility. The following procedure builds on the prior examples in this article to merge the mymovie files into a movie file.

Or you can directly make video file from TF2 using the following tutorial (taken from the steam community TF2 forums posted by Kuiper):

Here's how you can create a video using max graphics settings with constant framerate even if your hardware is low-end:

If you haven't already done so, you need to record a demo of the gameplay that you want to create a video from. Do this by typing record [demoname] in the console while you are playing and stop when you are done. Once you have your demo file, follow these steps:

.DEM files created by the demo recorder can be shared with other users.