From Team Fortress Wiki
Jump to: navigation, search
This page refers to sprays painted on surfaces in the PC version. For the tool that allows you to spray an image onto an item, see Decal Tool. For items that can be sprayed by that tool, see Category:Sprayable items. 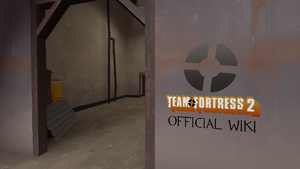 An example of a user set spray being put on a wall near the RED spawn on Badwater Basin.

Sprays are a feature of the PC version of Team Fortress 2 that allow players to "spray" (default key: T) their own images on surfaces within a game server such as walls, ceilings, or floors instantly. It may be compared to graffiti in real life.

Sprays are essentially disabled on Casual Mode; whilst players can still spray their images, other players will not be able to see them. The main way to see sprays in the game is via Community servers, though they are disabled by default and must be opted-in by the Advanced options menu. They can also be enabled with the command cl_spraydisable 0 (default is 1).

The image file can be uploaded to your spray list via the Multiplayer menu by selecting the spray of your choice to be imported from your steam directory. The image file must be converted to a .vtf texture file combined with a .vmt material. The game can automatically convert .jpg and .gif files (though not animated gifs). The game will generate the material file for you if you don't create it yourself. All sprays must be no larger than 512 kb size wise, or they won't show up in game.

Sprays are automatically stored in the Steam cloud, but can, like all other Steam cloud files, be ignored by the client. Like other temp files, spray thumbnails saved on the client's local game folder are deleted by default upon shutting down Team Fortress 2, and thus can't be "collected" over time in that default state. However, as of October 5, 2021 Patch, there is an option tf_delete_temp_files that can toggle temp files being deleted upon shutdown in the Advanced options menu.

They can be either enabled or disabled in the game's Multiplayer options tab, but how many are displayed at once, if any, is dependent on the value that mp_decals is set to by the server you are playing on. The value must be above 0 to show sprays, and the higher the value, the more sprays that can be loaded at once. The sv_pure console variable can also disable sprays from being displayed.

In-game screenshots that have been saved using the games screen capture system (default key: F5) are already formatted to be used as sprays, but will most likely have reduced image quality and be illegible to other players.

Sprays are used by players for many reasons including:

The practical application of sprays in-game is almost non-existent, although they can sometimes be used to distract enemies by making them believe that there are certain obstacles in their way that in most cases would want to be avoided such as distant Snipers, Sentry Guns, or Stickybombs.

Another use for sprays is for Spies to lay a trap for unwary opponents. A Spy equipped with a Cloak and Dagger can place a spray and then lie in wait for an enemy to stop and look at it, backstabbing them while their guard is down.

Another use for sprays is for advertising items for trading purposes. These sprays can serve to gather the attention of other traders in the server.

A more practical use of sprays is to warn players of location specific obstacles, such as a sentry or a Spy in the area.

There are sprays Engineers will sometimes put next to their Teleporter that denote which classes should use the Teleporter first. These lists generally put the Engineer himself on top, since he has to maintain his buildings, and the Scout on bottom, since a level 1 Teleporter charge rate would be about as fast as the Scout running to the frontlines on foot.