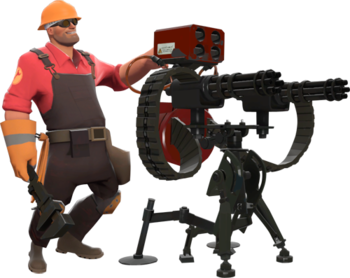 A level one Sentry Gun is a single-barrel machine gun with an internal magazine. The Sentry has a motion sensor, as stated in Meet the Engineer and the Sentry Manual.

A level two Sentry Gun appears to use an automatic cranking system to rotate the barrel, as indicated by the 2 electric cables visible. It also has 2 gatling guns and a laser sight is built into the carbine body. Its ammunition is belt-fed.

A level three Sentry Gun is identical to the level two, with the exception of an additional set of rocket silos on the top, which comes out of the back ammunition housing area.

The Sentry Gun costs 130 Metal to build, 200 Metal to upgrade to Level 2, and an additional 200 to upgrade to the third and final level totaling to 530 Metal. With each upgrade level, the Sentry Gun becomes more powerful, gaining machine guns, rockets, as well as more health. The firing range remains constant regardless of level. The Sentry Gun's ammo and health may be replenished with Metal by the Engineer hitting it with his melee weapon. Each bullet reloaded costs 1 Metal and each rocket reloaded costs 2 Metal.

When placing a Sentry Gun, the Engineer can see the limit of its range represented by a team-colored sphere of 1100 Hammer unit radius. A Sentry Gun that is being constructed has health increase gradually until it reaches its maximum health upon completion. While automatically scanning, the Sentry Gun rotates 90 degrees about the direction it is pointing; however, it is capable of detecting and rotating the full 360 degrees to lock on to a target. This takes a brief moment, however, which may allow faster foes to slip past its range. The Sentry Gun can also be manually rotated when placing to face a different direction before building commences. When the blueprint is shown, using the alt-fire button (default key: MOUSE2) rotates the blueprints counter-clockwise by 90 degrees.

As do other Buildings, Sentry Guns emit sound cues to alert players to their presence and status. A scanning Sentry Gun makes a number of beeps every time it reverses its rotation (1, 2 3) — the number of beeps corresponds to its upgrade level, where a Level 3 turret makes three quick beeps. Additionally, this beeping increases somewhat in volume with Level 2 then Level 3 Sentry Gun's level; so, the higher the level, the farther away the Sentry Gun can be heard; this fact can help attentive players find guarded areas. The Sentry Gun's scanning noise sounds slightly different when being fired on by the enemy; slight clicks can be heard along with the regular beeps. The scanning Sentry Gun also makes a distinctive noise when it detects and locks onto an enemy target just before firing — this noise both alerts the enemy of the detection by the Sentry Gun and the team of the presence of an enemy within the range of the Sentry Gun. Enemies detected by a Sentry Gun hear its noise as a slightly different alert noise. All of these scanning noises are silenced when a Sentry Gun is Wrangled.

A Sentry Gun constantly checks if there is an enemy player or building in scanning range with a clear line of sight. If multiple targets meet this criteria, it selects the closest one and switches targets the instant another target is closer. Sentry Guns also only attempt to fire once they have lined up with the target, even if firing before then could cause damage to an enemy. Sentry Guns have a maximum rotation and pitching speed when attempting to track a target, which increases with level and is faster than its idle scanning rotation.

After running out of valid targets for whatever reason, the Sentry Gun briefly stays pointing in the direction of its last detected target before returning to its scanning sweeps.

Unlike most other weapons, the Sentry Gun's weapons do not gain critical hits. It is possible, however, to make the Sentry Gun deal mini-crit attacks and damage if its target is coated in Jarate, being Marked For Death, or if the Engineer who built the Sentry Gun is close to a Soldier with an active Buff Banner – boosting the damage of each bullet to 22.

Sentry Guns are controlled by the TF2 server rather than the Engineer's client. That means Sentry Guns behave the same regardless of the connection quality of the Engineer that built them.

In Mann vs. Machine, Sentry Guns can gain benefits from certain Power Up Canteens their owners use. An ÜberCharge Canteen forms a Wrangler-esque shield around the Sentry Gun, reducing incoming damage by 90%. Use of a Kritz Canteen triples the Sentry Gun's firing rate. An Upgrade Buildings Canteen instantly upgrades the Sentry to Level 3 as well as fully repair it, however it does not refill the Sentry Gun's ammo. Sentry Guns can also be upgraded at Upgrade Stations to increase their health and firing rate, and the Engineer can even buy a Disposable Sentry Gun, allowing him to place a second Mini-Sentry that is slightly worse than a Combat Mini-Sentry.

Sentry Guns will not fire upon enemy Spies that are cloaked. In general, Sentry Guns do not fire upon enemy Spies that are disguised; however, if the Sentry was firing upon the Spy at the time the disguise was activated, it continues to fire upon the Spy until the Spy cloaks, breaks line of sight, or moves out of range. Sentry Guns also do not fire upon enemies in its range if there is a water surface between them or if the enemy is behind cover – this cover includes the Engineer's Dispenser. Sentry Guns are also unable to fire if an enemy Spy attaches a Sapper to it or while they are being upgraded/built. Feign deaths produced by the Dead Ringer are not added to the Sentry Gun kill/assist counter, but do contribute to the Best Little Slaughterhouse in Texas achievement.

When an Engineer hits a Sentry Gun with their melee weapon, the metal is spent in a certain order:

However, Ammo is usually filled alongside Health and the Sentry Gun's Upgrade Progress. When Ammo is being filled, the bullets for the Sentry Gun are filled first, then the Sentry Rockets are filled.[1] 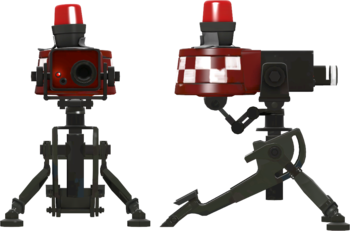 In Mann vs. Machine, the Engineer can buy a Disposable Sentry that at first glance just looks like a normal Combat Mini-Sentry Gun, however there are a few differences: