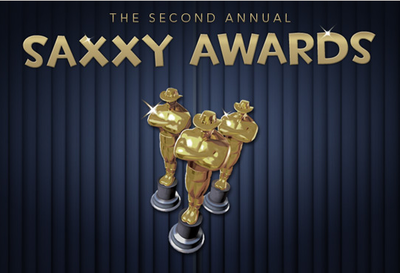 The Second Annual Saxxy Awards is a Team Fortress 2 contest in 2012 that began November 1st. The event is based on that of the previous year, whereas this year, users were encouraged to create videos using Source Filmmaker and upload them to YouTube™ for entrance into the contest.

The categories were "Best Comedy", "Best Drama", "Best Action", "Best Replay", "Best Original Universe" and "Best Overall". Valve added a Replay category to the event this year to give equal representation to creators who wanted to make videos in-game. As well as announcing a new category, Valve allowed the use of non-SFM tools for editing and effects in post-production.

Voting began on November 16, 2012 and ended on November 27 at midnight GMT. Voting was available to those with a Steam account and Team Fortress 2, and unlike the previous Saxxy Awards, there was no limit on the number of votes a day. Entries were shown randomly, though they could be filtered, and new ones were selected after a vote.

Players who voted during this period received a Saxxy Clapper Badge.

A promotional video was released on November 28, 2012, which revealed that the winners of the Saxxy Awards would be announced on the 30th.

All finalists received a Memory Maker in recognition for their contribution.

At 6:50pm ET, Friday, November 30, 2012, the TF2 Team announced on the official blog that the nomination of the finalists and the announcement of winners for the Second Annual Saxxy Awards will start in just 10 minutes. They also stated in the blog that in order to celebrate the announcement, they will be now giving a free Saxxy Clapper Badge to those who participated in voting for their favourite entries. And in the last part of the blog, they stated that due to getting fewer submissions than they hoped for the "Best Original Universe" category, they didn't think that it was fair to the other finalists to showcase the category at the awards site, since they had to battle through stiffer competition to make it this far. Although not listed in the awards site, a SFM short teaser named "Elements" has awarded for the said category.

All winners received a Saxxy for their accomplishment.

Here are the winners for the Second Annual Saxxy Awards:

The winner of "Best Overall" category was flown to Valve for a filmmaking session with Valve's Source Filmmakers and had their work aired live on the GTTV Spike Video Game Awards pre-show on December 7.