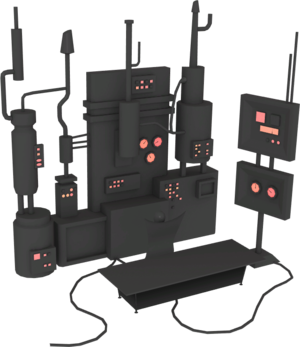 A Life Extender Machine or Life Extension Machine (LEM) is a device that, when connected to someone, can extend their life indefinitely. It was first introduced in the comic Loose Canon, where two such devices of similar design were introduced that subsequently kept the two rivals Blutarch and Redmond Mann alive until their murders seven decades later. These two Life Extender Machines as well as a number of later models are fixtures of the Team Fortress 2 Storyline. These devices provide a means for the brothers’ conflict to span well over a century of U.S. history; from the earliest settlement of the West and the Lincoln Presidency to the Cold War and the Space Race. Additionally, these Life Extender Machines depend on access to the contentious metal Australium; not only for the intelligence enhancement needed to invent the machines, but to power them as well.

The original two Life Extender Machines were completed in 1894 by Radigan Conagher, the current BLU Engineer's grandfather, after being exposed to intelligence-enhancing Australium. The first machine was built for Blutarch Mann at his request, while the second was built for Redmond Mann at the request of a woman resembling both Elizabeth and the Administrator. It was this woman who gave Australium to Conagher. If Blutarch’s and Redmond’s machines were actually fueled by Australium, they show no indication of such dependence; neither do these two brothers show any knowledge of the metal. Radigan Conagher’s notes indicate he also built a third Life Extender Machine for reasons unknown at some later date, though it wasn't revealed for whom this one was created. In about 1960, the BLU Engineer was summoned by his employer Blutarch, who explained that the machine was broken and didn't work correctly. Blutarch provided Engineer with his grandfather's blueprints to repair the machine, but claimed ownership of any other technology found in Conagher’s notes.

While each of the 1894 models was a large device with many dials, lights and mechanical components, later Life Extender Machines of diminishing size and increasingly advanced designs have been portrayed or implied:

As of the most recent published media, the true recipient of the third Radigan Conager LEM, its year of manufacture, and its degree of development have not been clearly revealed. Neither has there been a complete accounting of the true identities of the makers and wearers of all of the later models; especially since the full history of Emily, Elizabeth, and/or the Administrator has not been shown.