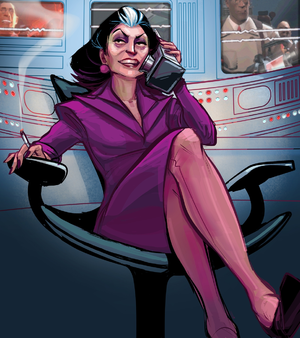 The Administrator in her control room.

The Administrator, whose given name is Helen,[1] who was also originally known as Announcer or The Voice[2] because of the character's role as Announcer, manages the affairs of both the RED and BLU companies and their teams of mercenaries, as well as TF Industries. She is the source of the mysterious, disembodied female voice that issues commands and announces vital events during rounds. A mature and thoroughly evil mastermind of a woman, the Administrator possesses both a piercing gaze and the sort of voice that commands total and unwavering obedience... or else. Her general demeanor tends towards either slight anger or various stages of bitter disappointment.

The Administrator is voiced by Ellen McLain.

The Administrator wields considerable influence and power. Once thought to be the owner of both the RED and BLU corporations, it has since been revealed that Blutarch and Redmond Mann were both still alive thanks to Radigan Conagher's Life Extender Machine during the Gravel Wars of the late 1960s. Despite their continued existence, neither of the Mann brothers seemed capable of handling the affairs of their respective companies, so for all intents and purposes the Administrator could have been said to control those. After the murder of the brothers by Gray Mann, the Administrator continued announcing for the combined Mann Co. team. However, Gray Mann's take over of Mann Co. resulted in her fleeing her post and later sending Miss Pauling to bring together the mercenaries to find the last stores of Australium. Her whereabouts are unknown, but she still probably wields considerable power due to her previous control over every major government on the planet. She tends to keep her operations top secret, manipulating events from behind the scenes. Any development that may chance unwanted attention is swiftly terminated with extreme prejudice.

In the Gravel War, when the two teams are fighting, she monitors the teams through many cameras and regularly communicates with each team individually from a single microphone connected to a central control panel. By skilled manipulation of a huge array of plugs and sockets, she can tap into a number of communication channels, including ones that address the entirety of the RED and BLU teams. Her messages are relayed to the teams through an Alarm-O-Tron 5000 speaker system, itself connected to a board with a myriad of signs that illuminate in situations of varying urgency, such as "Intruder Alert - RED Spy - In Base". A massive monitor bank in front of her control panel allows her to keep a watchful eye on events at all times. Her exact motives in ordering the mercenary teams employed by both her companies into mortal combat on a regular basis remain mysterious.

The Administrator is attended by a number of staff, including loyal assistant Miss Pauling and several messengers.

The Administrator considers inter-company friendships a profound breach of trust, forbidden by contract. After her assistant Miss Pauling brought it to her attention that the RED Demoman and BLU Soldier had become friends, she had communication channels opened up specifically to them both. Through these, she personally encouraged each to kill their new friend in order to earn a mysterious and valuable new weapon developed under Mann Co. Just as intended, this quickly destroyed their blossoming friendship and thus beginning the seven day war.

The Administrator (with Miss Pauling) and owner of Mann Co., Saxton Hale, were all questioned by United States Senators about the death of Poopy Joe (who they bid to launch into space for one dollar), and the disappearance of the entirety of the United States' national reserve of Australium committed to powering the crashed rocket. She disclosed her (redacted) intentions and methods, which included her stockpiling Australium for years and manipulation of eighteen idiots to help her. The Senators all were shocked by the story, and decided to end their questioning quickly afterwards. The document that contained the information had the word INCINERATE stamped on it.

The Administrator hired a director to record some background information about what the RED team members might say when asked questions from the files the Administrator gave the director. Not intent on keeping him for long, as she considered him to be a dupe and as sub-normal as the mercenaries, she gave the order to Miss Pauling to kill the director afterwards in a mine tunnel. She also sent photos of the Sniper's parents and the Heavy's home and Minigun, a well as one of the Soldier's heads back to the RED team. After the mercenaries killed the messenger, she chastised them since the mini-television sets they carry are apparently extremely expensive, and warned them of the dangers of discussing the terms of their contracts with anyone. She does let them know that in this case, it was a rather absurd example and all gathered evidence – except the Soldier's heads – were destroyed.

As a result of Gray Mann's hostile takeover of Mann Co., the Administrator was forced to lie low. At the same time, Mann Co.'s Australium cache went missing. Six months later Miss Pauling received typed orders to reassemble the team and seek out Australium caches. In Teufort, just before the trial of the Spy and Scout, Miss Pauling then meets a frail, aged woman in a dark Teufort alley for instructions. Keeping her distance, this woman claims to have succeeded in acquiring almost all of the 89,000 tonnes of Australium in existence over those six months, and sends Pauling after the last remaining cache.

However, after then failing to acquire the New Zealand cache, Miss Pauling receives worried telephone calls from the Engineer. The Engineer is attending to a frail, aged woman surviving on a miniaturized Life Extender Machine, the latest of a series of advancing models developed by generations of the Engineer's family, giving her enough time to "settle an old debt" as the last of her Australium supply runs out. The Engineer expresses concern to the old woman that they using the last of the Australium they have.

In the original Haunted Hallowe'en Special, Elizabeth was introduced in the text of the The Last Will and Testament of Zepheniah Mann as Zepheniah Mann's "dearest maidservant", to whom Mann bequeathed the residue of his estate, his tobacco plantation, and the remainder of his fortune, asking her to find the gravel he never found and put it in a pit. The will was accompanied by the left half of a torn family photograph showing a woman sitting at the side of a bed-ridden Zepheniah Mann. This woman is presumed to be the maidservant, Elizabeth. The Loose Canon comic of the Engineer Update sets the date of Zepheniah Mann's death and the reading of his will to 1850, with another image of Elizabeth, this time addressed by name. Both images clearly resemble Helen of the 1960s.

Loose Canon portrays a similar-appearing woman influencing Radigan Conagher to build a second Life Extender Machine for Redmond in addition to the one he is building for Blutarch, showing that she had an interest in perpetuating the stalemate between the two brothers. Given that 40 years had passed and the image had not seemed to have aged notably, and that she claims to have only been acquiring Australium since 1880, it was possible to speculate that a different individual is portrayed in 1890. However, Saxton Hale names both the 1850 and 1890 characters as Elizabeth in Catch-Up.

It wasn't until the Mann vs. Machine update that the previously obscured portion of the will was exposed, revealing that Zepheniah had also given Elizabeth his entire cache of "miracle gravel" (interpreted as Australium) and charged her to keep it away from his "weakling son", Grey Mann.

Because of the resemblances in appearance, habits, demeanor, and connections with the Mann family, Administrator Helen is presumed to be related to Elizabeth, either as a descendant or the very person herself. If Helen is the Elizabeth of 1890, or 1850, her life must be extended by some means that, by the 1950s or 1960s, is more advanced, miniaturized, and rejuvenating than even that devised by Gray Mann. Such a device is seen being removed by the Engineer from the right forearm of the woman in his care.

Aside from the portrayals of Elizabeth and the Administrator, other characters refer to a woman of great power and influence amassing all of the Australium in the world. A characteristic of these instances is that the woman's name is not stated. Saxton Hale and census records destroyed by Miss Pauling refer to the Administrator as "Helen".[3]

Gray Mann and Charles Darling both state that "her" acquisition of the Australium began 150 years ago. 150 years back from 1972 reaches to around 1822, the year the three Mann sons were born, and 70 years before Radigan's first Life Extender Machines. On the day of the Trial at Teufort, Miss Pauling collected print genealogy records at the Teufort Library, confirming that the microfiche copies had already been destroyed, then throwing a folder labeled "Helen" onto a fire, but carrying away some rolled up paper. Following a week behind Pauling, Gray and Olivia inquire at the library about census records dating back to 1850, the year of Zepheniah Mann's death. They find a scrap in the ashes of those records that suggests a birth date for "Helen", which was destroyed.

The Administrator's appearance has a storied past. It started with a fan rendition by the artist Makani, which spread around the Internet, proving to be rather popular. Shortly thereafter, the artist was invited to Valve headquarters for a visit where the design was then purchased. Many months later, during the promo for the Haunted Hallowe'en Special, a woman with a near-identical face could be seen standing next to Zepheniah Mann on his deathbed. Finally, on December 9, 2009, the Administrator's face was officially revealed using Makani's design with some slight clothing modifications. Most notably, the half-red-half-blue attire replaced by a full purple blazer and skirt, (purple being a color only obtained by mixing red and blue); but with red accents (earrings, nails, and hose). With the release of Meet the Director, the Administrator's appearance has undergone more changes.

Elements of her appearance, notably dark hair with white Mallen Streak and a heavy smoking habit, were employed in the comic Loose Canon to suggest at least a familial relationship between the Administrator character and two female characters introduced in that comic.