Mann Manor is the Halloween version of the Attack/Defend Control Point map Mountain Lab. It is a night-time map set in and around the old, decaying mansion of Redmond Mann. It shares elements with other Halloween maps as well as having some gameplay elements that were unique to the map when it was released, such as the Horseless Headless Horsemann, a neutral boss that periodically spawns at contested points on the map and mercilessly attacks all players. Also, in keeping with the Halloween spirit, Pumpkin bomb hazards frequently spawn around the map and Halloween pumpkins can be dropped by killed players.

Since Scream Fortress 2015, Halloween Masks are available through completing Merasmissions (Halloween Contracts), or through the Halloween Transmute feature. Haunted Halloween Gift drops have also been replaced by "Ghost Gargoyle" pickups, which interact with the Soul Gargoyle backpack item (obtained during Scream Fortress 2015 or later Halloween Events ) and give the player points, which both raise the "Souls Collected" value on the Soul Gargoyle, and count towards completing Merasmissions.

Mann Manor was released as an official community-developed map with the Scream Fortress Update, due to winning the TF2Maps.net Art Pass Contest. 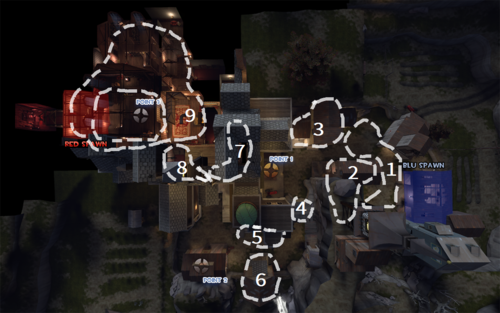 Mann Manor was the first map to feature an enemy like the Horseless Headless Horsemann – a giant, hostile entity that will chase and kill members of both teams. He has a great deal of health, can severely wound any player with one attack, and moves as fast as the Scout. Additionally, the Horseless Headless Horsemann is capable of maneuvering around obstacles and climbing slopes, but cannot jump. Thus, defeating him requires a good deal of effort and cooperation from multiple players from either team.

The Horseless Headless Horsemann will spawn at whichever capture point is being disputed. He will single out and chase one player randomly determined to be "It", slaying any other players unfortunate enough to be caught between him and his target. A player who is "It" will be notified via an on-screen message and can be identified by a white skull and crossbones icon which floats above their head, similar to the effect from the Fan O'War. A player will be designated as "It" until he is killed, is far enough away from the Horseless Headless Horsemann, survives for 30 seconds, or is in an area inaccessible to the Horseless Headless Horsemann, such as the respawn room, in which case another player will be randomly assigned as "It". Additionally, a player can hit an enemy with a melee weapon to pass the "It" status to them.

There are nine rubber duckies hidden throughout the map. While previous statements claim this is homage to a gaming community Rexy belonged to, he has stated this was merely a fun Easter egg and was implemented instead by YM. There are also other hidden animals, such as a spider and frog.