From Team Fortress Wiki
Jump to: navigation, search
This article is about the fictional element. For the rare weapon quality, see Australium weapons. 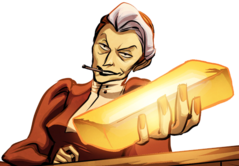 An ancestor of the Administrator presenting an ingot of Australium.[1]

First revealed by the story depicted within the Team Fortress 2 comic Loose Canon, Australium is a mysterious metal element that can adapt and transform itself into different states and forms, with invigorating health effects, therefore making it extremely valuable and sought-after.

Australium was discovered in its namesake country, Australia.[2]

Prolonged exposure to Australium increases both intelligence and virility. Outward signs of exposure include increase in muscle mass, love of fighting, heavy drinking, as well as increased growth of facial hair, even in women.[3][4][5][6][7]

The discovery of Australium has been the cause of Australia's rapid technological advancement. Said advances include cloaking devices, teleportation devices, and the "entire spectrum of moustache sciences".[3]

Australium is seen to be sold and exchanged in the form of solid bars, similar to the way gold is often reserved and stored. Despite sharing similar appearance properties to gold, such as a similar color and the level of reflectivity, bars of Australium can be identified by the unique logo of a lone figure boxing a kangaroo, one of Australia's most iconic animals. This act of boxing between the kangaroo and the figure is supposedly how Australia chooses their next rightful king.[3]

Australians are known to be very secretive about Australium, therefore allowing them to continue to outpace the rest of the world in the technological race.

Australium was used in terms of payment to Dell Conagher's grandfather Radigan, in exchange for him building Blutarch Mann and Redmond Mann "Life Extender Machines" to further their own attempts to try and outlive each other to inherit all of the land given to them by their father. Radigan Conagher is believed to have found many more caches of Australium, and Dell later discovers hidden files detailing these caches amongst the blueprints Blutarch has lent to him to repair his own "Life Extender Machine".

The United States once had a supply of Australium. It was all invested in the attempt to launch American monkeynaut Poopy Joe into space before the U.S.S.R. could launch their own monkeynaut into space, Vladimir Bananas. Following the tragic failure of this attempt, all the Australium went missing. As a result of the incident, Saxton Hale, whose facilities were used for the launch attempt, and the Administrator were brought before a U.S. Senate hearing investigating the disaster. As far as is known, the United States Australium supply remains missing.

The U.S. reserves were indeed stolen, horded in a two hundred thousand pound store of Australium in a vault beneath Mann Co. Monkeynautics. After seizing control of Mann Co., Gray Mann uncovered the vault, only to find it empty. He deduced that the Administrator was behind the absence of the Australium after finding a cigarette within the safe.

Australium features in the game mode Special Delivery, as an Australium briefcase.

It is a neutral colored briefcase with a plaid pattern that turns team-colored once picked up. It appears to be overflowing with items of clothing, with a necktie sticking out, has a radio transmitter attached to it, and has a transparent vessel attached to the side, containing a shining bar of Australium. When moving with the briefcase, a particle effect is emitted that shows several pieces of random clothing trailing behind the player, along with a golden sparkling effect.

Australium was originally used in the creation of two rare weapon variations (the Golden Wrench and the Saxxy). When a player is killed by one of these weapons, their body model turns into a golden statue that remains for others to see. As of the Two Cities Update, Australium weapons have been expanded to a range of weapons, some of which do not share the ragdoll-altering qualities of the original two weapons added that are made from Australium.