Overtime occurs when the timer runs out on a map while an objective is currently being contested, giving the attacking team a brief window to win or extend the game with a last-second push. 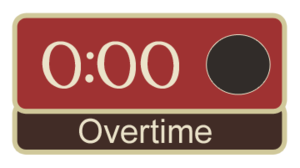 The RED team's HUD timer showing that the round is in Overtime.

On Control Point and Territorial Control maps, Overtime occurs when the timer runs out and a point has been partially captured. It ends either when the capture has been completely reverted (in which case the game will end) or the capture is completed (in which case more time is added to the timer and the game continues unless it is the last point). The reversion speed of incomplete captures is accelerated by a factor of six during Overtime.

On Payload maps, Overtime will occur when the map clock runs out if the cart is not moving backwards. The cart timer automatically changes to 5 seconds (if Overtime starts with the timer already less than that, it will keep counting from its current time). Overtime ends when the timer runs out and none of the BLU players have managed to secure it in time (ending the game) or when the cart moves to a checkpoint (adding more time). Payload Race maps do not have Overtime with the exception of the first two stages of Nightfall; if neither cart has reached the end of the track when the timer expires, both will begin rolling forwards on their own, meaning the losing team must push their cart faster in order to catch up before the winning team's cart finishes.

During King of the Hill games, Overtime occurs when one team's timer has reached zero but the other team has partially captured the point. Overtime in King of the Hill is on a per-team basis and will continue as long as the point is not wholly in that team's control; gaining control wins the game. It is possible for Overtime to occur on both teams if the second team reaches its time limit while the first team is trying to recapture the point. At this point, the first team to gain complete control of the point will end their respective Overtime and win the game.

The special case of Degroot Keep is a unique mix of these previous Overtimes. Much like Control Point maps, as long as the control points are being captured or reverted, the round will not end. If both points are captured, the gate will still open and the timer for the gate to close is the BLU team's window to access the final point. If the BLU team captures the point, they win; if they don't, most of them will be stuck in the RED team's base.

Overtime generally is fast and hectic. Oftentimes the entire offensive team rushes the objective in a desperate attempt to salvage their game and the entire defensive team crowds around the contested objective. Scout rushes are a common Overtime tactic on Control Point and Payload maps so as to keep contested Control Points from reversing or the Payload Cart timer running out, and Spies are often sent on suicide runs to keep the Intelligence alive until a full team can coordinate an attack to fully capture it. King of Hill games with both teams in Overtime present a concentrated zone of chaos as each team desperately tries to push the other off the Control Point so as to complete or reverse the capture to win the game.