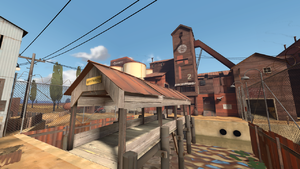 The bridge area in the center of 2Fort. 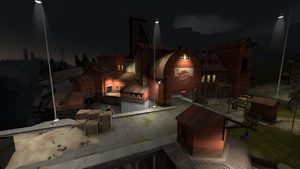 The bridge area over the crevasse on Double Cross.

Capture the Flag (commonly shorted to CTF simply) is a game mode which features both RED and BLU teams with their own Intelligence briefcase (known as the flag). The goal for both teams is to capture their enemy's Intelligence continuously until they have reached the game's capture limit (default limit is 3) whilst preventing their enemy from achieving the same. If no team completes the capture limit before time runs out, the match will enter Sudden Death mode (unless either Intelligence has been taken and is still in play, in which case Overtime occurs until both teams' Intelligence are secured again). 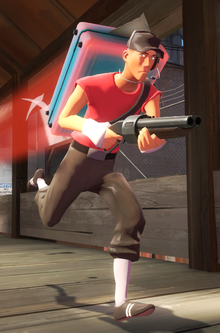 A RED Scout carrying the Intelligence.

The Intelligence, also known as the "intel," "flag," or "briefcase," is the eponymous flag and objective of the Capture the Flag game mode. It is a team-colored briefcase sporting a complicated numbered lock pad on the front and papers protruding out of its joints. Once picked up by an enemy, the case begins to glow in the carrier's team color and will emit paper particles and a long team-colored trail.

During a Capture the Flag round, each team is given their own Intelligence located within their section of the map. It must be retrieved from this location by the opposite team and returned to a defined point, usually the opposing team's capture zone where their Intelligence is stored.

The Intelligence can be taken by any enemy player that walks up onto it, but can not be interfered or moved by a friendly player. Once picked up by a player, the Intelligence will then appear on their back and the Announcer will notify both teams that the Intelligence has been taken. The Intelligence indicator located on the HUD will then point in the direction of the carrier, who must make their way out of the enemy base and back to their own. Carriers are visible to their respective team players as they emit a green, yellow, or red glow (based on their current health) that can be seen through walls.

While carrying the Intelligence, players become more vulnerable. Additionally, certain conditions may result in the player being unable to pick up and carry the Intelligence.

The Intelligence can be dropped manually if the player carrying it presses the drop-item button (Default key: L). Once dropped, a clock-like timer ring will appear over the Intelligence. When the default 60 seconds have passed without an ally picking it up again, it is automatically returned to its original position in the team's base. If an ally picks up and subsequently drops the intelligence, this timer will reset. Teams are required to defend the dropped Intelligence during this period or face losing it.

If the Intelligence carrier is killed by certain environmental hazards that prevent the dropped Intelligence from being touched, like the bottomless pits on Double Cross, it will be forcibly returned to its original position. This functionality is inherent to the map's code and not the intelligence itself, and thus has to be added to the map manually by its creator. While Valve official maps all share this for specific bottomless hazards, not all custom maps may utilize this function. 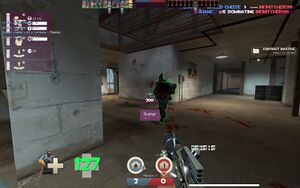 A BLU Demoman with an outline as if he were carrying the intel, when he isn't