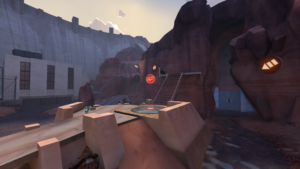 Hydro is a somewhat-cramped map that forces swift and calculated TC tactics.

Territorial Control is a game mode introduced from the initial game release. The objective is to take over the entire map by capturing designated areas known as "territories". A Territorial Control map is split into several different territories, each possessing a Control Point. One territory on each end of the map represents one of the team's bases; the others are split equally between the teams. Each round in a Territorial Control match consists of a point-versus-point skirmish between adjacent territories. The configuration to be played is chosen randomly each round, with the condition that each team is in control of one of the points. Once the round begins, each team tries to seize the opposing point while preventing the enemy from doing the same to theirs. When a team seizes the enemy's Control Point, they win the round and seize the territory. The match then continues with another configuration based on the new territorial controls. If a team is down to their base point, the next round will pit the base against an adjacent territory. The offending team must now capture the enemy team's base while the other defends it. If the attacking team seizes the base, that team wins the game, and a new game will begin with the territories reset.

Rounds always last for eight minutes. Normally, standard Control Point rules apply; if time expires with neither point seized, sudden death will ensue. When a base is being attacked, Attack/Defend rules apply instead; the defending team will automatically re-seize the attacking team's point if time expires before the enemy can seize the base. Overtime is also in effect and will activate when the time expires with a control point capture in progress.

Territorial Control synthesizes aspects of Control Point and Attack/Defend style gameplay — while being more fast-paced and of the dominating spirit of King of the Hill — and therefore careful strategy must consider both offense and defense. Given the nature of the game mode, each class ought to utilize their best assets that advance speed in general and aggression or defense depending on the team. Assertive yet cautious tactics are recommended, and wise teamwork can particularly shine in this mode.