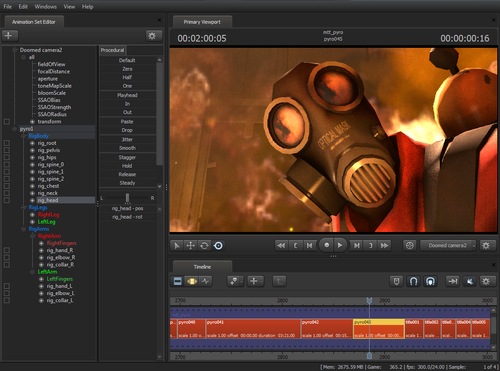 Source Filmmaker (SFM for short) is a tool used to create most of the videos running the Source Engine. Source Filmmaker is a video capture and editing application that works from inside the Source engine. It allows users to record themselves many times over in the same scene, creating the illusion of many participants, as well as supporting a wide range of cinematographic effects and techniques such as motion blur, Tyndall effects, Dynamic Lighting, and depth of field. Motion blur has now been added to the games themselves, though only when the view is moving at high speeds – not per-object as in the filmmaker. Per-object motion blur is in the replay system of Team Fortress 2.

The tool was leaked in the original Team Fortress 2 Beta release. Following the discovery of the program's files inside Team Fortress 2 Beta, the community succeeded in creating a (mostly) stable version. Since then, many fan videos have been created with the tool. Valve officially released a closed beta version of the program on June 27, 2012, following the release of Meet the Pyro. On July 11th, the Source Filmmaker beta became public. The Source Filmmaker tool does not only allow you to record yourself in a scene over and over again but also allows the creation of pose to pose animations, posters and image sequences. There is also an audio editor below the timeline allowing the user to add audio files into their project such as music or lines from the Team Fortress 2 in-game characters, these are built in to the Source Filmmaker tool by default. Models, sounds, maps and a wide variety of custom content can be found on the Source Filmmaker Community Workshop.

Example of a Poster

SFM allows you to:

Source Filmmaker's public release was officially announced on June 27, 2012 as part of Day 3 of the Pyromania update[1]. A closed beta began on the same day, allowing select users who completed a survey access to the program. The initial release features an updated UI in comparison to the version of Source Filmmaker leaked years prior, and also allows users editing access to Meet the Heavy's assets. An open beta began on July 11, with Meet the Engineer assets added.

Valve has used Source Filmmaker for their own game trailers and short films, most significantly the Meet the Team series of videos, and the intro videos for Left 4 Dead and Left 4 Dead 2. It is mostly used when the film contains something outside of the game's capabilities, like new facial expressions and cinematic animations. Besides Team Fortress 2 videos, Valve has used Source Filmmaker with Left 4 Dead and Left 4 Dead 2, Day of Defeat: Source, Portal 2 as well as Half-Life 2 for announcing the game's arrival on the Macintosh.

Note that links marked with asterisk (*) are outdated and may lead to controls that are either changed or removed.