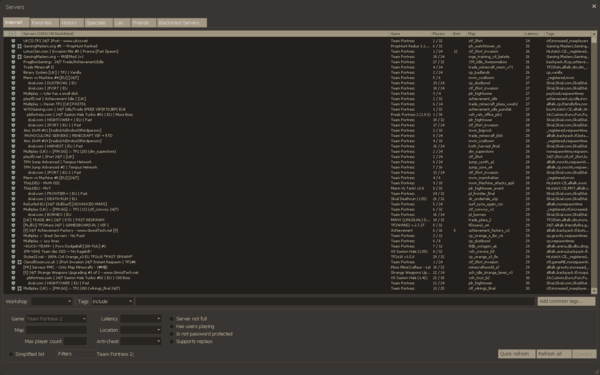 The Server Browser in Team Fortress 2.

The Steam Server Browser allows a player to search from a list of available servers and choose a map/game mode of their choosing, as well as add various filters to refine searching.

Generates a list of available servers from the Internet. Servers that do not meet one or more of the filters are temporarily omitted from the selection. The list is not generated until "Quick refresh" or "Refresh all" is pressed. Normal filter options are shown.

A specific server can be added to the "Favorites" list by right clicking the server name in the browser and clicking "Add server to favorites". The server will not show up if it's taken off the Favorites or is unreachable. Normal filter options are shown.

A list of the current status of all the recent servers a player has visited. Servers can be deleted from the list by right-clicking the servers name and left-clicking "Remove server from history". Normal filter options are shown.

Not usually used for normal servers. Spectate is a link to servers running the Source TV option. It allows a unlimited amount of players to watch a slightly delayed match running live on the server through a "camera man" (either run by an AI or human). This is used by many competitive\tournament groups to allow an audience to view their matches. Players usually join by an external IP and port number posted on a competition website. Normal filter options are shown.

Looks for a server running on a LAN (local area network). Normal filter options are shown.

Lists which servers a player's friends are currently on. Normal filter options are shown.

The servers in this list will not appear in your server browser when searching for a server. Servers can be placed on the list by right clicking the name and selecting "Add server to blacklist". A count of how many servers you have blacklisted will be shown next to the server count in the main server window. Blacklisted servers may still be joined. Only the server name and the blacklist date filter options are shown.

The bottom part of the window will only show three options for this menu only.

The top of the list of the server window shows a bar that can be toggled to filter servers alphabetically, numerically, and by icon.

A picture of a golden lock is shown to indicate that a password is needed to enter the server.

A shield showing the server is secured with Valve Anti-Cheat technology. It is not a guarantee that other players using unwanted software tampering will not join, but is a deterrent against said players with the warning that detected tampering will result in a permanent account ban.

Displays the name of all available servers as the list is updated.

Show what type of game is in play. Normally shows Team Fortress 2 as the main game, but server mods, such as Freeze Tag and Prop Hunt, may be shown here instead.

Shows the current number of bots in a server.

Displays the current map being played.

Displays the ping, or how long it takes to send and receive packets to and from the server, when the browser was last refreshed.

Shows what tags have been assigned by the server. This is used to some effect to show what features are enabled in a server and to filter out servers that don't have said features. Some common tags include:

These are the filters that can narrow server searches into a tight group of similar servers.

Adding certain words or "Tags" to this bar allows a player to refine searches by special features of listed servers. The first box can be selected to show "include" or "do not include" for the following tags inside the box to the right. The middle box is where a player may enter tags, separating each tag by a comma, with no spaces. The third box that says "Add common tags..." is a popup box that shows a list of the most commonly used tags.

This option is grayed out and permanently set to Team Fortress 2.

Allows a player to type in the name of the desired map, including the map type prefix. The browser will purge any current servers not playing maps with the typed name.

Allows players to set a maximum threshold of total player slots per server. Setting the number to 24 will purge any servers from the list that have 25 or more player slots in a server.

A clickable box that changes the text list into a picture list showing the map and groups of servers playing on that map, with the most optimal server based on filters showing first.

The time it takes to send and receive packets to and from the server. Omits servers which have ping above the filter's limit.

Can be selected to give a general location of where a particular server is located.

Selects a server with or without VAC.

When checked, will not show servers that have no available player slots.

When checked, will not show servers that have no players on them.

When checked, will not show servers that require a password to join.

Completely refreshes the list of servers, updating all the server data.

Refreshes only the current servers listed.

Connects to the current selected server; if the server is full, it shows the "Server Info" tab.