From Team Fortress Wiki
Jump to: navigation, search
Not to be confused with Player Destruction. 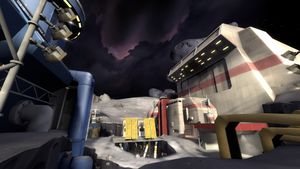 Because the game mode and its map are in development, certain textures and animations may be missing, and any gameplay elements described in this article are subject to change.

The only current Robot Destruction map is symmetrical, similar to Capture the Flag maps. This game mode requires players to go into the enemy base and destroy their robots to earn points. When the robots are destroyed, they drop Power Cores that may be collected to add points to a team's score.

When one team has acquired the necessary amount of points, a timer starts counting down and a shortened version of The Art of War begins playing as "rd_finale.wav". If the currently-winning team stays the leader by the time this timer is elapsed, they win the round/game.

Power Cores are dropped when a robot is destroyed. They may be collected by any member of the team that destroyed the robot. If left uncollected, Power Cores will eventually start flashing for a few seconds before finally vanishing.

Reactor Cores represent the stored points of the enemy team. Successfully stealing a Core from the enemy base and depositing it on your team's Core spawn point directly transfers to the stealing team any points stored in the core. Unlike the Intelligence briefcase in Capture the Flag, the Core can contain a variable number of points depending on how long it is "charged" by an enemy player standing on the core spawn point. The Core cannot be moved from its spawn point until at least 25 points have been charged into it.

Like the Intelligence briefcase, a Reactor Core may be picked up by any enemy player that touches it, and although it can be dropped deliberately or on the carrier's death, it cannot be picked up or otherwise affected by a friendly player. Friendly players can defend the Core from being picked up by physically preventing enemy team members from touching it. If a Core is not touched by an enemy player in a set amount of time, it will disappear and any points stored in it will be returned to its team.

Teams score points by collecting Power Cores and by capturing or recovering stolen Reactor Cores. One point is scored for each Power Core collected. One point is deducted from a team’s score for each point charged into a stolen Reactor Core. Points charged in a stolen reactor core are thus removed from scoring until either captured by the enemy or returned to the team’s Reactor. The stolen points in a Reactor Core are awarded to the stealing team’s score if they carry it to their Reactor’s capture point; however, those same points are returned to the owning team’s score if the Reactor Core has been dropped for a long time. The teams play to 300 points.

Team scores are displayed at the bottom center of the HUD. Each team's score tracks higher as Power Cores are collected and as Reactor Cores are captured by or returned to that team; and tracks a decreasing score while a player is charging a Reactor Core with points stolen from that team. A player’s display of scores shows green numbers as friendly points are added and enemy points are stolen and shows red numbers as friendly points are stolen and endpoints are added. Distinct sounds give notice or warnings of friendly or enemy points scored or stolen.

Unlike Mann vs. Machine robots, these Robots are harmless and will run when you attack them. The robots are separated into three areas, named A, B, and C. They will always follow their path that is marked on the floor, unless they are being attacked. Currently these Robots are similar to Buildings in their attributes: they are unaffected by knockback (including Compression Blasts and shield bashes), Afterburn, Backstabs, Mini-crits, Critical hits, and Bleeding. Also they are immune to the effects of Jarate and Mad Milk and cannot be marked for death. Robots also do not grant any on hit/kill bonuses (for example, health on hit with the Black Box), nor can they be sapped. Some classes have increased damage against these robots: Spy and Medic weapons deal 200% their base damage, Scout weapons deal 150% their base damage, and Sniper weapons deal 225% their base damage. Heavy and Pyro only do 75% damage to bots. Robots are immune to damage fall-off and ramp-up, so excluding splash damage, any attack on a Robot will deal a constant amount of damage from any distance.

The robots are defenseless, but will attempt to escape from attackers by running in circles. After 3 seconds without taking damage, the robots heal themselves at a rate of 6 health per second. All of the robot groups share a respawn timer, and will reset when the timer runs out.

When destroyed, A and B robots drop their associated amount of Power Cores in a single drop. When C robots are destroyed, they perform a death animation wherein they run around dropping a stream of Power Cores. The robots also drop gibs when destroyed. These gibs may be collected for Ammo or Metal.

Robots give 5 health per second to nearby friendly players as well as to disguised enemy Spies.

Note: These voice lines are in beta and may be altered in the future. In addition, robots occasionally emit the death-notice sound from Half-Life