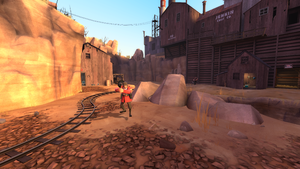 A Soldier bot in action on the Dustbowl Training map.
This page is about computer-controlled players in the game Team Fortress 2.

A Bot or BOT is a computer-controlled player on a server. There are two types of bots in Team Fortress 2: AI bots and Puppet bots. AI bots are coded with sophisticated artificial intelligence designed to emulate player actions in game, and can be used without enabling cheats. Puppet bots have no AI coding, but are useful for testing and training. Puppet bots require the server to have cheats enabled, which also disables achievements.

The stock AI bots, or TFBots, are designed to emulate human players and are not directly controlled. Additionally, their classes are chosen at random. They use sophisticated AI code based on the PlayerBot and Infected AI featured in the Left 4 Dead series.[1] AI bots do not require the server to have cheats enabled; therefore, achievements are enabled while playing with them. There is one exception, however; Bots do not see Deathcam shots when killed; therefore, a player cannot attain Deathcam-related achievements. Also, killing a bot with a Strange weapon will not increase the weapon's kill count, unless the weapon has a Strange Part: Robots Destroyed applied to it, in which case, the kill will be added to the Strange Part and not the main counter.

AI bots can be indirectly controlled to an extent:

WARNING: The game is likely to crash if you edit the navigation mesh with bots enabled.

Bots can be used on any map on which the above steps have been performed without having to repeat them, except for entering the "tf_bot_add <number>" command each time bots need to be added.

Auto-generated nav meshes work best on Control Points, King of the Hill, Payload, and Capture the Flag maps. On Mannpower maps, the bots will play as Capture the Flag, but be unable to use Grappling Hooks or intelligently use the Powerups they walk over.

Setting the value of the console command "tf_bot_offense_must_push_time" to 0 allows bots to fight each other in maps without objectives that they can recognize, unless the map doesn't have any respawn room entities.

For a more comprehensive list of commands, see the Valve list of TF2 console commands and variables.


To use AI bots on supported maps, the server administrator should type the following commands into the console (some may require sv_cheats to be set to 1):

AI bots are fully released[citation needed]. Currently, all classes are working properly due to the Hatless Update, including the once-buggy Spy. AI bots only work properly for most official King of the Hill maps, some Payload maps, Attack/Defend maps Dustbowl and Gorge, Capture the Flag maps, and Mann Manor (on the latter two, bots can only be added by using the tf_bot_add command in the console). The use of AI bots on non-supported maps is possible by following certain steps; however, they will not emulate human players as well.

Bots will not work properly on any PLR map as they either can't jump over the railings on Hightower or get stuck in a random corner in spawn; and bots have a dance party on any other PLR map (this may change in the future).[citation needed]

The AI bots are programmed to have different names, with many of their names being references to Team Fortress 2, Valve's other works, and computer programming. Many of these names have been requested on the Steam forums.

The following bot names were found in a leaked source code version of TF2, containing bot names that were never put into production for unknown reasons.

AI bots names can also be customized by a player by typing in, for example, tf_bot_add heavyweapons blue "Blu Hoovy"; this example would put a BLU Heavy on the BLU team with the name "Blu Hoovy".

Puppet bots have no AI code and cannot move or act on their own. These bots can be used like puppets though: players can manipulate them to follow the player's commands such as following the player around and firing their weapons. Puppet bots are mainly used for testing purposes and can also create stunning visuals if manipulated accordingly. To spawn puppet bots, sv_cheats has to be set to 1.

These commands may or may not work for AI bots as well.

Note: entering the command without any values will display the command's current setting and a brief description.