Dustbowl is an Attack/Defend Control Point map, and is the subsequent remake of the Team Fortress Classic map of the same name. It and Gravel Pit were the first Attack/Defend Control Point maps for Team Fortress 2 and was one of the six initial maps included with the game's release. Dustbowl is the only map for which a training mode has been created.

In Dustbowl, the goal of the attackers, BLU, is to win through a series of stages in order to win the map. Within each stage, the attackers must capture two control points, A and B, which are held by the defenders, RED. Point A must be captured before the attackers can assault B. The timer is increased by 4 minutes and 30 seconds for every point capture and once a point is captured it is locked and cannot be retaken by the defenders.

Like all Attack/Defend maps, BLU plays the attackers while RED plays the defenders. Egypt and Gorge share a similar design with Dustbowl.

BLU is attacking and must capture both points, A and B, in all three stages to win the match. RED must prevent BLU from achieving their goal.

Directions are described from BLU's perspective.

Control point A Is inside a small building on the left.

The first point is on top of a building on the left (from BLU's perspective).

The second control point is on a platform next to RED's spawn.

The first control point is on a platform straight across from BLU's exit. RED has a shortcut from one of their spawn rooms to this point. This shortcut is sealed once BLU captures this point.

The final control point is the base of a launch pad, under a rocket, in the center of RED's base. 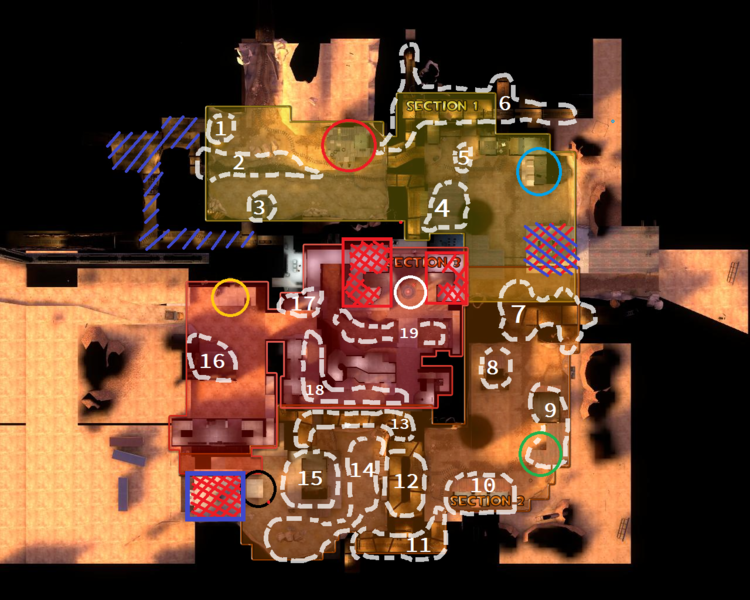 All control points have the same capture times.