Gravel Pit is an Attack/Defend Control Point map. It was one of the six maps included with Team Fortress 2's initial release.

Like all Attack/Defend maps, RED always plays defense and BLU always plays offense, and once the BLU team has captured a control point, it is locked and can never be retaken by RED. The map differs from other Attack/Defend control point maps in that it allows the attackers to capture the first two points (points A and B) in any order before assaulting the final control point (point C). Points A and B are directly accessible from the BLU base, while they must cross through one of them in order to reach point C. RED's base is located near point C.

The objective of Gravel Pit is that BLU must attack and capture all three points in order to win the match. A and B must be captured before C can be. The objective for RED is that they must hold out and prevent BLU from capturing the final point C. Time is added to the countdown if BLU captures either points A or B in order to buy more time for Control Point C.

Control Point A: The Radio Tower

Control Point B: The Radar 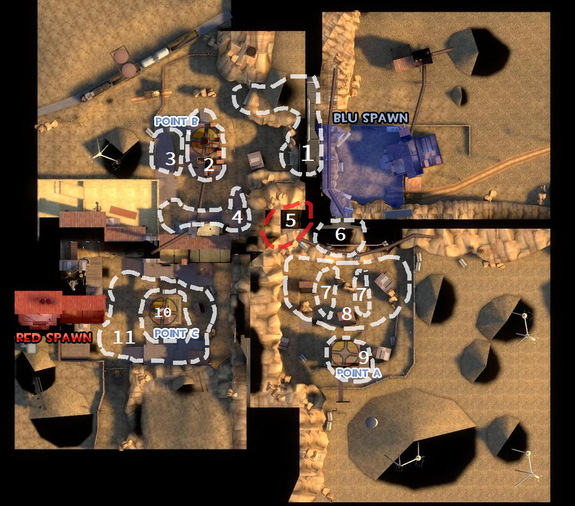