From Team Fortress Wiki
Jump to: navigation, search
This article is about the game map 2Fort. For the town, see: Teufort (city).
2Fort has multiple variations, including Invasion.

2Fort is a Capture the Flag map and the subsequent remake of the Team Fortress Classic map of the same name; these maps are both based on the Team Fortress map 2Fort5. 2Fort was the first official CTF map for Team Fortress 2, and was one of the six initial maps included with the game's release.

Two similar forts face each other, separated by a contaminated canal of deep water. A covered bridge spans the stream and battlements exist on each fort, providing excellent positions to assault oncoming players, particularly for Snipers.

To win, a team must repeatedly capture the opposing team's Intelligence by picking it up from deep within their fort and carrying it all the way to its own base until reaching the game's capture objective (3 captures on Valve servers), while preventing the enemy from achieving that same goal.

There are three entrances into each fort, however, not all of them are accessible to every class. The primary entrances are the two openings on the ground level. There are short ramps leading up to each entrance, and the entrances converge under an open grate. These ramps allow defenders to attack intruders from above. The second entrance is through the sewers which run underneath each base.

The entryway between the sewers and the base features a stairway and a pool of water; this area is a viable chokepoint. The third entrance is the battlements of each base, which can generally only be accessed by using special jumping maneuvers as a Scout, Soldier, Pyro, Demoman, or Engineer. It can also be accessed by a Medic equipping the Quick-Fix who is healing a Soldier or Demoman.

2Fort's bases are the easiest to defend of all stock CTF maps due to the long, easily-blocked passages leading to and from the enemy team's flag room. Every capture will require a substantial amount of team coordination, especially when the player count is high. 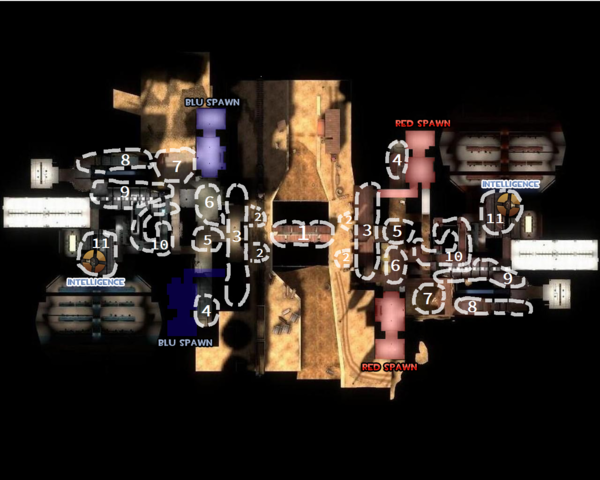