Maybe add in that dispensers can be used to block off door ways to the enemy like blocking the top level entry to intel on 2fort? -Pokeymehlljordan 12:36, 11 October 2010 (UTC)

Should I change one of the Dispenser trivias which is wrong? It mentions that the sentry will not detect you behind the enemy dispenser, but it actually shoots you, yet unable to kill you (Dispenser works as a shield).Harrip1 11:22, 20 October 2010 (UTC)

Plough right on in you may want to read the trivia guidelines first though Help:Style_guide/Trivia --Markd 11:25, 20 October 2010 (UTC)

i Know ive asked this a few times but i just want to be sure before i get in big trouble for this can i add spy achievements to dispenser e.g. Sap Auter (the dispenser can be involved in it). Because this is a big edit i will be doing i just wanted to make sure everyone is ok with it. Lexicon249 04:45, 6 December 2010 (UTC)

If you're going to add a related achievement, the achievement should be directly related to the article. Sap Auter applies to all buildings, not just dispensers so I would avoid it here. --

OK well can you please explain why the Ambassador has the achievement 'A Cut above' when you don't specifically need the Ambassador for it you just need any spy pistol for it. Lexicon249 04:50, 6 December 2010 (UTC)

Because the Wiki is not perfect. Either way, it's not a strict rule and can be bent when it makes sense. I'm just saying that in this case it's not necessary. --

For a short time after the WAR Update, Spies were able to build Dispensers through the use of the console command "build 0", but could not upgrade them.

I'm not so sure if the above trivia is good trivia. It's not as if this is interesting to anybody anymore, is it? I'm sure that this is a little known fact, but it seems entirely useless.

Also, I discovered that when standing away from a dispenser, the screen (that displays the E to F) is not lit up, even though the dispenser has already been built. When getting within a few feet of it, the screen lights back up. Should this be added to the bugs section? I would like anybody's opinion. — The preceding unsigned comment was added by Hojung1996 (talk) • (contribs)

When did Trivia become useful? I say keep it. Also, the other point might be a client-side issue. Dispensers appear fine at any distance on my PC. That said, it's best to test it on a few more PCs than only one.

I think it's keepable. A little irrelevant to player who didn't play during that time, but interesting none the less. --SilverHammer 13:38, 31 July 2011 (PDT)

In trivia say "A Dispenser can give ammunition and heal through thin walls.". I try it, dispenser give me only metal and ammo but dont heal through wall. 2012 HEADSHOTS 09:38, 3 September 2012 (PDT)

What is the range of the Dispenser's resupply beam (barring obstructions & Mann Versus Machine upgrades)? Open Source Forever 15:15, 19 February 2013 (EST)

I found some files from one of the earliest version of TF2 which include files called dispencer1.vtf and dispencer1_blue.vtf. These appear to be new dispencers modeled after those from Team Fortress Classic. Is it worth posting them? TheNoobThatWas (talk) 08:47, 19 July 2013 (PDT)

It appears that the Minigun textures are actually slightly better vesions of the old Assault Cannon model, and the Dispencer1.vtf is a better quality, team colored version of the Classic Dispenser. I can't think of why VALVe would redistribute them. 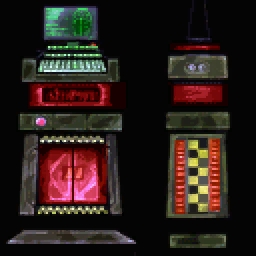 This page's table says it regens every 5 seconds.

Another thing is that the video shows 21 health regened per second on the friendly Heavy, while the table says 20. Probably rounding, should be changed/mentioned on the table. ⇒

Until Valve confirmed that this is a feature. I'll put this on hold. For any further discuss about this please go to Buildings discussion page.