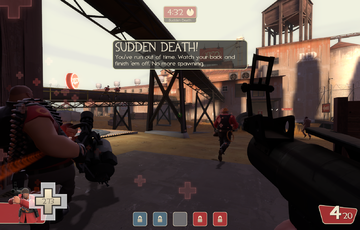 Like normal rounds, Sudden Death still has a time limit; however, there are several restrictions designed to hasten the game's conclusion. Players do not respawn when they are killed and Engineer buildings are instantly destroyed if their owner dies. Health kits and resupply lockers are also unavailable, meaning the only sources of healing are from Medics, Dispensers, or weapons with healing effects (such as the Black Box or the Sandvich).

At the beginning of the Sudden Death period, a player may still re-select their class as long as they have not left the spawn room yet. If they leave the spawn room and then choose a new class, they die if the option "Suicide upon class change" is checked and have to wait until the next map starts to play again.

There are several other types of Sudden Death, and the type played depends on server variables:

Unlike normal rounds, it is possible to win in one of two ways; either by completing the original objectives (capturing the Intelligence, capturing the control points, etc.) or by killing all enemy players. If neither happens before time runs out, the match ends in a stalemate.