Upon taunting (Default key G) or pressing alt-fire with the Amputator equipped, the Medic brings his weapon up to his shoulder, leans on his right foot, and plays a soothing melody, healing all allies within a certain radius while causing them to emit a team-colored glow around their feet.

The taunt adds small amounts to a Medic's ÜberCharge level, though only when allies are healing from the aura. It can heal disguised or cloaked Spies, and does not overheal. In addition, Pyros wielding Back Scratchers receive diminished healing. The healing effect requires line of sight to the target, and therefore cannot heal teammates who are on the opposite side of an obstacle. The Medic is credited with a kill assist if a teammate within the taunt's area of effect successfully kills an enemy. This is also one of the two ways that the Medic is able to heal teammates in Medieval mode, the other being with the Crusader's Crossbow.

Taunting with the Bonesaw or Vita-Saw yields the same action from the Medic, but without the healing benefit. In addition, the Vita-Saw plays a deeper cello tone instead of the light melody the Bonesaw and Amputator play. 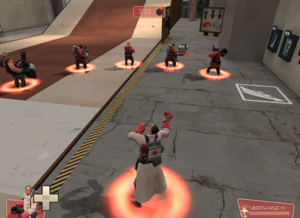