At the ends of each map are the final control points, both of which reside outside each team's spawns.

Control Points 2 and 4 are located in the main Granary mills between the main yard and final control point. These are the only control points on Granary to be enclosed within a building. With seven narrow entrances from all angles, this building can potentially get quite congested and become a site of hectic fire-fights.

Control Point 3, or Mid, is located in the center of the map. Being the halfway point and main focus for most battles, the central point has a slightly raised, large capture point area. This capture area is surrounded by cargo containers stacked two high providing vantage points. There is a medium-sized health pack at either end of the yard, two small medpacks on top of the containers, and four small ammo boxes on the ground at each side of the yard. 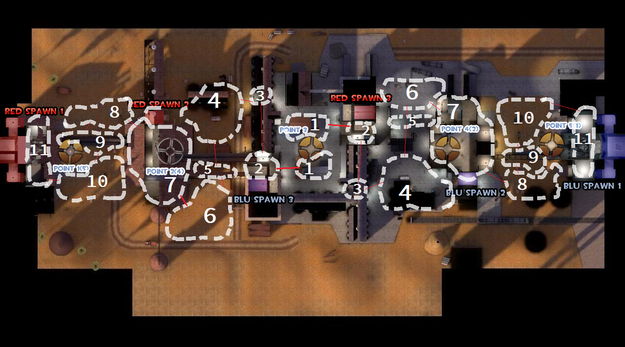