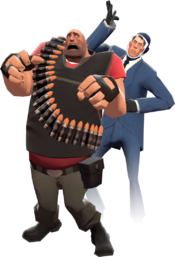 A backstab is a context-sensitive attack that a Spy can perform with any of his melee weapons. When a Spy uses any one of his knives to hit an enemy from behind, a successful backstab is performed, resulting in an instant kill in almost all cases. Backstabs deal no damage to enemies with invulnerability effects, such as those under the effects of a standard ÜberCharge, though the Spy still raises his knife and performs the usual backstab animation.

Should a Spy perform a melee attack that connects with an enemy while he is behind said enemy, a backstab occurs. Backstabs deal damage equal to 200% of the target's current health and are always critical hits, resulting in a total damage of six times the victim's current health; while the critical damage can be negated, this does not stop the stab from being lethal unless the target has significant additional protection.

A backstab triggers as long as the Spy is anywhere within a 180° angle behind the enemy, utilizing the enemy's current aiming direction as straight forwards. To indicate that a Spy is within the required range and angle to perform a backstab, he raises his knife and turns it downward, primed for a kill. The knife remains in this position until the target is no longer in reach, which is 40 Hammer units to the target's back, or the Spy attempts a backstab by attacking. The knife turns downward even if positioned behind a cloaked or disguised enemy Spy. As the Spy's melee weapons do not have a delay between the swing being initiated and the damage being dealt, as long as the knife is pointed downward, the Spy simply needs to attack for an instant kill to occur.

Like normal melee attacks, backstabs can be performed while disguised, though the Spy proceeds to lose his disguise whether the attack connects or not. Backstabs are nothing more than pure damage, and so cannot injure or kill invulnerable players. Buildings and Halloween bosses cannot be backstabbed.

Robots in Mann vs. Machine can be backstabbed just as normal players. In addition to this, if a robot is sapped, it can be backstabbed from any direction, not just from behind. However, giant robots operate much differently. Backstabbing a giant has a base damage of 750, but this is reduced to 25% of that (188) by default; each armor penetration upgrade restores 25% of the base damage, up to 125% of the base (938). Spies must therefore upgrade their knife in order to have a chance at taking out giant robots.

Trickstabs happen when an enemy has spotted the Spy, and the Spy tries to outmaneuver the enemy in order to attempt a backstab.