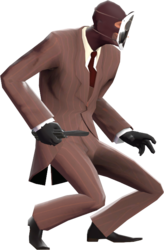 Crouching is a feature that reduces the area of your character, making you a smaller and less-visible target. This can make tasks such as defending Sentry Guns, sniping, pushing Payload carts and ambushing easier. Crouch-jumping also facilitates explosive jumping and crouch-jumping will increase the distance on jumps. Some obstacles require you to crouch-jump on top or over them as crouching in mid-air brings your legs and feet up.

When crouching, the character will move much slower than their default movement speed. But unlike running, you move backwards and forwards at the same speed. The default key for a crouch is Ctrl in the PC version,

in the PlayStation 3 version, and

in the Xbox 360 version. Crouching can be selected to toggle in the Options menu.

When crouching, your character will move 66% slower except when you are a Sniper who is scoped in (98.67% slower) or aiming an arrow (85% slower) or a Heavy with his Minigun revved (immobile).

Crouching does not increase your accuracy when firing a weapon, unlike in other Source games.