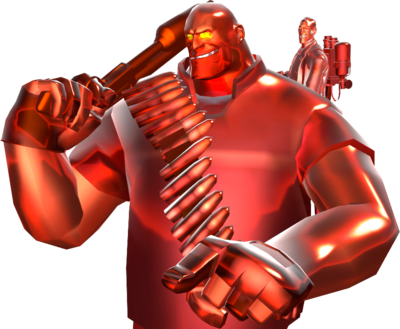 ÜberCharge (pronounced oo-bur in regular English, not like in German) is an ability of the Medic. ÜberCharge is built up as the Medic heals players with his secondary weapons, Crusader's Crossbow, hitting enemies with his Ubersaw, or the Medicating Melody taunt. Each healing tool has its own unique ÜberCharge effect, which the Medic can unleash once his charge meter reaches 100%, excluding the Vaccinator, which can unleash an ÜberCharge at increments of 25%.

While the Medic has their secondary or melee weapon drawn, a bar showing how much ÜberCharge is built up appears where the ammo count usually is on the HUD. If a friendly Medic is healing the player or is under the player's crosshair, a team-colored box pops up on the HUD, displaying the username of the Medic, the name of the healing gun they have equipped, and their ÜberCharge percentage (if the Medic uses a Name Tag on their secondary weapon, that name will be displayed instead of the weapon type). Medics with the Solemn Vow equipped and Spies will also see this information when their crosshairs are on an enemy Medic.

The ÜberCharge meter fills at different rates, depending on the state of the Medic's healing target.

When the Medic's charge reaches 100% (or 25% for the Vaccinator), the meter on the HUD will begin flashing and the character will speak a related voice response. This announcement can warn enemy players of the Medic's full charge, but the Medic can cancel the response by activating another voice command. Medics can also use the "full charge" command at will with option 8 of Voice Menu 2, regardless of if they have a charge ready or not.

Once the meter is full, the player can deploy the ÜberCharge by pressing alternate fire (default key: MOUSE2). Upon deploying the charge, certain visual effects will be applied to the affected players; the deploying Medic will play an activation-related voice response, and soon after the patient's own voice response will play. Like the "fully charged" announcement, these can warn enemy players of a deployed charge, and they can be canceled if the speaker activates a properly-timed voice command.

An ÜberCharge will only affect a player for as long as the healing beam is trained on them; if the Medic dies, deactivates the healing beam, changes healing targets, draws another weapon, or is forced out of range, its benefit to the patient will end prematurely. Once activated, the ÜberCharge will continue to drain, regardless of the Medic's active weapon, though the Medic will only receive the ÜberCharge's effect if he's holding out the Medi Gun as his active weapon. In other words, Medics cannot charge into battle with their offensive weapons while being invulnerable or crit-boosting themselves. With a single patient, an activated charge lasts 8 seconds, draining the meter at a rate of 12.5 points per second. The Medic is free to move his healing beam to another player, which will give the effects of the charge to the new patient, but the total ÜberCharge duration decreases by half a second for every second that another player is being ÜberCharged.

The only exception here is the Vaccinator, which places a shield on both the Medic and patient upon activation, and which lasts for 2.5 seconds, although if the Medic switches away from the Vaccinator he will still lose the benefits of the shield. Vaccinator charge is immediately consumed upon each use, rather than gradually draining, and multiple shields of different resistances can all be placed upon as few or as many targets as necessary.

The Medic and his healing target will glow in their team color, with yellow or purple eyes and a metallic sheen across their bodies. A slight team-colored distortion will appear around the first-person view of the Medic and his patient.

The stock Medi Gun's ÜberCharge makes the Medic and his patient invulnerable to most forms of damage. Both players are still vulnerable to telefragging and certain environmental effects - namely saw blades, trains, and pitfalls, but not drowning or fall damage. They are also still subject to knockback and the Pyro's compression blast. The Sandman's alt-fire attack cannot stun them, but the initial strike of the Organ Grinder, Skewer, and Spinal Tap taunt attacks can (though they will still inflict no damage). If the deploying Medic is stunned, the healing beam will temporarily break and leave the patient vulnerable until the Medic has recovered. Similarly, striking an ÜberCharged Medic from behind with the Holiday Punch will cause him to laugh, breaking the healing beam.

The Medic's target will continue to be healed at the normal rate. Activating the Medi Gun's charge or applying it to a new target extinguishes fire. Invulnerability will linger for one second after breaking contact with the beam, allowing a dexterous Medic to grant invulnerability to multiple patients simultaneously. Medi Gun or Quick-Fix-charged players do not count towards pushing the Payload cart or capturing control points (although they can block enemy captures). Medi Gun-charged players cannot pick up the Intelligence while invulnerable, and a Medic activating a Medi Gun's ÜberCharge while their patient is carrying the Intelligence will not apply invulnerability to the patient. The Medic cannot activate a Medi Gun's ÜberCharge while carrying the Intelligence.

Upon activating ÜberCharge, yellow sparks will travel down the healing beam (identically to the stock Medi Gun), and a team-colored glow and a crackle of electricity will be emitted from the Kritzkrieg and the weapon of the Medic's patient.

For the duration of the charge, all attacks made by the Medic's patient will be critical hits, which deal 300% of the weapon's base damage to enemies and ignore the normal modifiers for range and randomized damage. This can help with the Holiday Punch due to the fact that the laugh occurs on critical hits, and the Kritzkrieg deals critical hits to the ÜberCharge's target patient. Projectiles fired during the Kritzkrieg charge's duration will retain their critical effects even after the charge has ended.

While the Kritzkrieg will continue to heal its target at the normal rate, activating the charge grants no additional defensive benefits to the Medic or his patient. As buildings are immune to critical hits, the Kritzkrieg is a poor choice for assaulting an enemy Sentry Gun (though critical hits can easily dispatch any Engineers attending to the Sentry Gun).

The Medic's healing beam will pulse and glow with greater intensity, and a team-colored ring surrounds the Medic and his target.

The Medic and his healing target will be healed at an accelerated rate (from 100.8/s while under fire, up to 302.4/s if not wounded in the last 15 seconds.) Both players will also be immune to stun effects, slowdown, and any forms of knockback. The charge will heal the Medic at the accelerated rate when deployed, whether or not it is actively healing another player. If the Medic is healing a rocket-, sticky- or flare-jumping player, the Medic will be launched with equal force in the same direction.

While offering greater resiliency, the Quick-Fix's ÜberCharge provides no protection from bursts of high damage, such as Stickybomb traps, backstabs, headshots, or critical hits. Even discounting these threats, focused firepower can overcome this accelerated healing.

The patient and the Medic will be covered by a shield with an icon of the type of damage being resisted above both their heads.

Unlike the other Medi Guns, the Vaccinator's ÜberCharge is split into 4 segments of 25% each, which can be activated individually. Like the Kritzkrieg and Quick-Fix, it has an increased ÜberCharge build rate which allows it to have an ÜberCharge ready much faster, although this rate is reduced once the patient is at full health or higher. While actively healing a teammate, the Vaccinator grants a 10% resistance to one of three types of damage: Bullet (including arrows from the Huntsman bow, bolts from the Crusader's Crossbow, and syringes from any of the Medic's Syringe Guns, despite them being technically projectiles), Explosive, and Fire.

Upon activation of ÜberCharge, the Vaccinator places a shield on both the Medic and his patient, increasing the amount of damage that is resisted. 25% of the ÜberCharge meter is immediately consumed upon placement of the shield, which lasts for 2.5 seconds on both parties regardless of whether or not the heal beam is broken. This shield resists 75% of the selected damage type instead of 10%, and fully negates critical damage. Multiple shields of different damage types can be placed on the same patient, or multiple shields of the same damage type can be simultaneously active on several teammates, limited only by the amount of ÜberCharge that the Medic has.

Because it can only resist selected damage types, it is possible to deal full damage to players protected by a Vaccinator ÜberCharge by attacking them with a type that is not being resisted. It does not have a melee resistance option, so melee attacks will counter a Vaccinator shield. Additionally, due to its reduced healing rate and reduced ÜberCharge build rate on overhealed patients, it is not a very effective secondary weapon for buffing up teammates to maximum effectiveness.

Multiple ÜberCharges from multiple Medics deployed upon a single player at once do not multiply the effect. While combining charges on a single target yields no additional special effects, Medics with different secondary weapons can grant a single target a combination of their effects. For example, a player receiving a normal ÜberCharge and a Kritzkrieg ÜberCharge will receive the effects of both; invulnerability and guaranteed chance of critical hits.

A Spy can trick an enemy Medic into ÜberCharging them while they are disguised, a tactic which can cripple pushes and give the Spy a surprise attack with the misplaced ÜberCharge. The Spy gains all the benefits of the charge. Until the Spy breaks disguise, they will appear to enemy players just as they would if they were on the enemy team (a Spy glowing in the color of the enemy team, in the case of a Medi Gun ÜberCharge, for example). To allies, and all players once the disguise is broken, the Spy and his ÜberCharge visual effects will appear in his own team colors (though dropping the disguise will terminate the healing beam and the charge's effects soon after).

The Amputator gives ÜberCharge by healing players with the Medicating Melody taunt.