Monopoly: Team Fortress 2 is a board game based on the classic board game Monopoly, except with a Team Fortress 2 theme. The gameplay and prices are identical to the standard edition of Monopoly as of the 2008 gameplay revisions, making the theme purely cosmetic. The board, spaces, cards, tokens, money, and buildings have all changed to reference Team Fortress 2 in both appearance and text. The game is recommended for 2 to 6 players and ages 17 and up. The game first released in early November 2017.

Due to the United Kingdom (plus other countries) using different names for many spaces compared to the United States, they will be referred to as (US name)/(UK name) in this article. 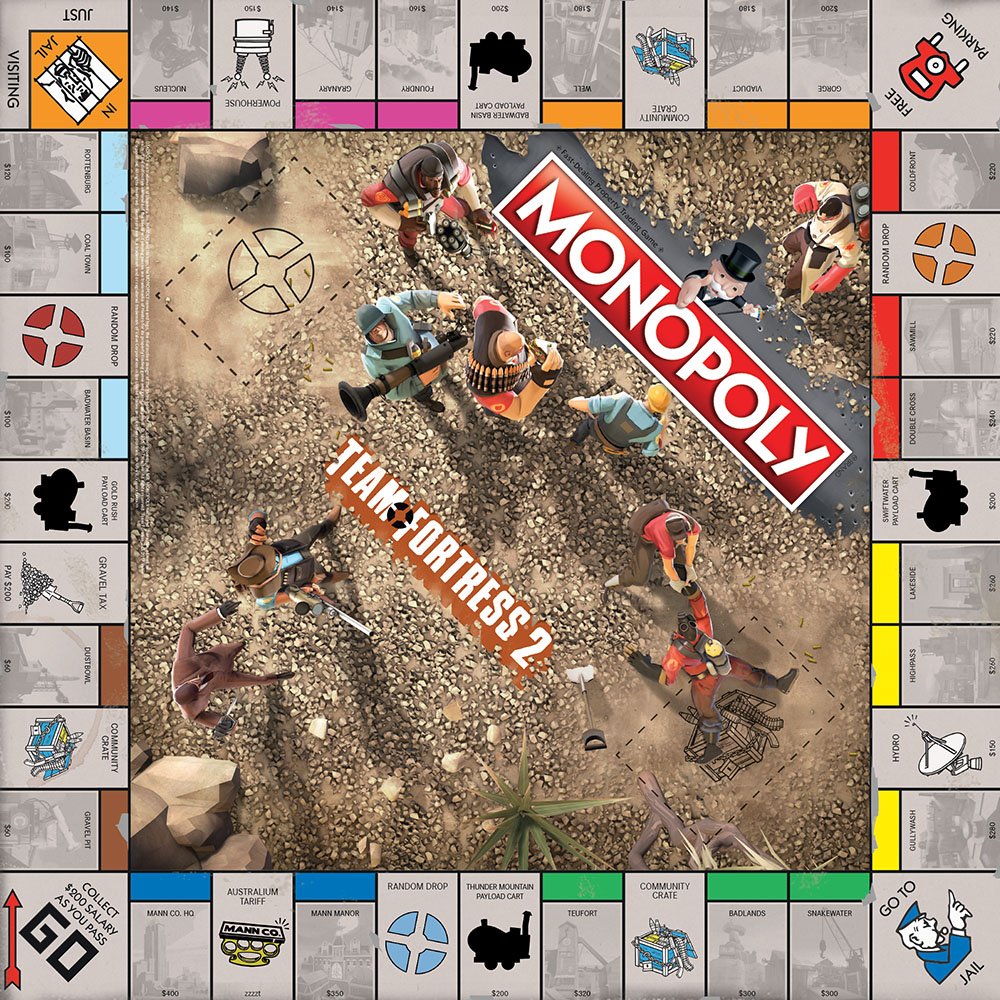 Many spaces have changed to be Team Fortress 2 themed. The only spaces that went unchanged were the four corner spaces: Collect $200 Salary as You Pass GO, In Jail and Just Visiting, Free Parking, and Go to Jail. In the middle is outlines for the Random Drop and Community Crate card decks to be placed in. The center art shows all nine classes with a mix from the RED and BLU teams.

In order from Collect $200 Salary as You Pass GO to Mann Co. HQ (Boardwalk/Mayfair):

The front box art depicts a BLU Scout, Heavy, and Pyro pushing a Payload Cart towards RED, while facing enemy attacks of Rockets, Grenades, Syringes, Sniper bullets, a Stickybomb trap, as well as boot, iron, and dog Monopoly tokens. The back cover describes the game and has a picture of all of the pieces in gameplay. The sides show the Monopoly and Team Fortress 2 logos.

Random Drop cards are used instead of Chance cards, and Community Crate cards are used instead of Community Chest cards. These cards use Team Fortress 2 themes and quotes in their description, with an illustration from one of the Comics to the right. All of their effects are identical to the effects of cards of the standard edition Monopoly cards as of the 2008 gameplay revisions.

The six tokens are the Towering Pillar of Hats, a Balloonicorn, a Saxxy, a Sentry Gun, a Wooden Cow Cutout (like in the background of 2Fort), and a Bombcart.