This article is about the fictional Badlands company, Mann Co.. For other uses, see Mann Co. Store and Mann-Conomy Update. 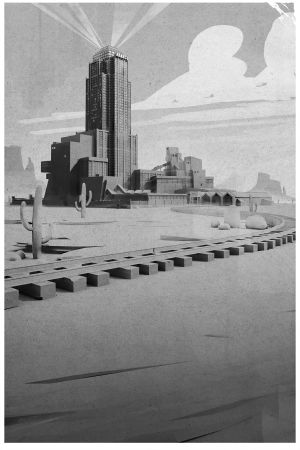 Mann Co. is a multinational division of TF Industries with headquarters in the Badlands, near Teufort, New Mexico. In the Badlands area alone, the company operates over 300 plants, office buildings, warehouses and outlet malls.

The company was originally incorporated in the United States as Mann & Sons Munitions Concern by the arms-dealer Zepheniah Mann, who co-managed the firm with his brother, Silas Mann. Upon his death in 1850, Zepheniah Mann bequeathed ownership of Mann Co. to close friend and hunter Barnabus Hale. The company was subsequently owned and operated by three generations of Hales.

The organization was recently re-branded as Gray Mann Co. by the most recent CEO, Gray Mann, previously the CEO of Gray Gravel. Mr. Mann was recently killed in his offices in Australia, believed murdered by a former employee of Builders League United.

Corporate succession has not been resolved. Gray Mann is survived by his daughter and immediate predecessor at Mann Co., Miss Olivia Mann. Additionally, Saxton Hale has expressed interest in returning to the position.

The company is known for their weapons, munitions, and cosmetic lines. They have long published trade catalogs, including the early The Zepheniah Mann & Sons Co. Quarterly Concern, a "compendium of broad swords, musket guns and doomsday weaponry for immediate sale", and the more recent Dapper Rogue, a catalog for the "gentleman scoundrel". The Administrator has been known to make use of Mann Co. for custom orders via her assistant Miss Pauling. In the Gravel Wars, Mann Co. was the sole supplier to Reliable Excavation Demolition and Builders League United. In the subsequent Robot Wars, Mann Co. opened sales of advanced technologies to the mercenaries.

Mann Co. products, at least those promoted to low-end markets (especially to employees), have a reputation for quality and safety issues. Products tend to break down, catch on fire (although Saxton Hale claimed that that's how he knows the products are working), and melt into people's skulls.

Mann Co. was also the subject of two Senate investigations, one in relation to their alleged part in the tragic destruction of American monkeynaut Poopy Joe's capsule during takeoff and the other in relation to teaching boys aged 6-16, among other things, moral turpitude, arson, vandalism, hippie assault, tax fraud, at-home laryngectomies, car theft, gorilla slaughter, and the Heimlich Maneuver (which had just been invented and was still considered controversial).

Mann Co. went "online" after Saxton Hale discovered the existence of the Internet when one of his employees, who was losing a fight against a gorilla during "Gorilla Wrestling Fridays", asked for his mother to be notified by email. Saxton Hale currently owns England due to the Internet venture. The Mann Co. Store was created as well – a way for customers to buy hats, weapons, bundles, and other miscellaneous items for real currency. 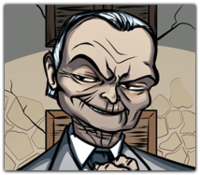 Mann Co. was founded by Zepheniah Mann, who operated the firm with his brother, Silas Mann, until Zepheniah's death in 1850, passing ownership of the company to Barnabus Hale. A decade later, Barnabus acquired the Coal Mine and Munitions Factory from Zepheniah's sons Blutarch and Redmond Mann. Ownership of Mann Co. later passed to Barnabus' son, Billious Hale, who controlled the company through the first half of the 20th century. In 1922, Billious closed the historic Coal Mine and Munitions Factory and turned the company's operations toward the future of hat manufacture. The third Hale, Saxton, took the company into the 1960s, becoming the very public spokesman for the company's retail products.

Gray Mann's tenure at Mann Co. was too brief to determine his intentions for the firm. Gray Mann spent the third quarter of 1972 inspecting and auditing most divisions and holdings of the organization. He had recently returned to the headquarters of his robotics division of Gray Gravel in Australia, where he was murdered by a former BLU employee.

Main article: The Naked and the Dead

Subsequent to the vacancy of Mr. Mann, a consortium of older separated BLU employees attempted a hostile takeover of the Mann family concerns, with particular interest in the intellectual property regarding life extension technology. Their bid was countered and terminated by a coalition of interests seeking access to Australium; consisting of a group of laid off Mann Co. employees led by Miss Pauling, Saxton Hale, and a representative of zoo magnate Charles Darling.

*The "boutique" line is just regular Mann Co. products with fancy paint and exorbitant price tags applied in a backroom.

This list contains some of the following notable products Mann Co. has released.