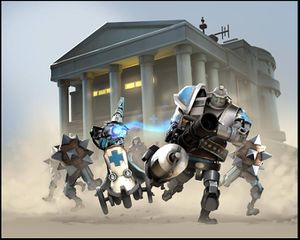 Romevision is a cosmetic variation, similar to Pyroland, available only in Mann vs. Machine mode that changes the appearances of robots, tanks and carrier tanks in an ancient Roman style, themed after the Total War game series. To enable it, the player must either wear the Hardy Laurel (similar to the Pyrovision Goggles) or play together with at least one other player who simply owns the item, it does not have to be equipped. In this case, the game will ask each player on the team via notification if they desire to enable it. This option is also available in the Advanced Multiplayer Options menu.

Unlike Pyroland which changes map, audio, and item appearances, Romevision solely works on the existing robot models in Mann Vs. Machine. Robots will change appearance to have armor equipped in the style of Roman military, while tanks take on appearances similar to battering rams and the carrier is based on the Pantheon of Rome.