From Team Fortress Wiki
Jump to: navigation, search
This article is for content released in the update. For the patch itself, see November 21, 2013 Patch.

The Two Cities Update was a major update for Team Fortress 2 that was announced on November 20, 2013 and released the following day. 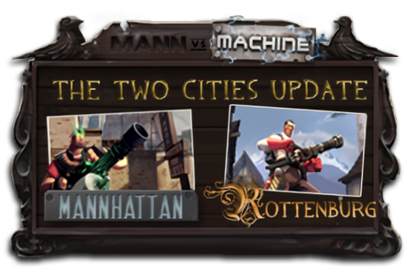 The first of the cities introduced was Mannhattan. A bustling, pollution pumping city, placed in the bustling eye of America.

The second city announced was Rottenburg. A quiet, calm village in Germany, known to be the home town of the Medic.

Another map, Snakewater was also released. Unlike the other two, however, this is a Control Point map.

The update introduces new items that can be obtained from a Two Cities Tour. These include the Killstreak kit, which applies weapon effects to whichever weapon it is applied to, along with a rare set of Australium weapons. Among the new upgrades that the player may unlock are Mad Milk Syringes and the Projectile Shield for the Medic, and the Rocket Specialist for the Soldier. The Reanimator was also introduced as a way for Medics to revive allies on the battlefield directly.

A new feature allows the player to view raw damage numbers on the scoreboard in MvM. This includes counters for how much money a player has on them at any given time, along with the total damage they have done, the amount of damage done to tanks, the amount of healing one has received, among others. In addition, these are also the first MvM maps to feature moving spawn points and robots that can introduce additional bombs to the game. Also, players are now able to refund all of their credits spent on upgrades, so long as a certain quota is reached.

Twenty-one new achievements were introduced in the update.