Campaigns are weeks-long to months-long events, usually requiring a premium Campaign Pass for participation, and involving offerings of missions or contracts that award players various items after completing them, such as Weapons, Cosmetic items, Cases, or War Paints, as well as Blood Money that can be redeemed in-game for selected items. Campaigns were first added into the game in the Gun Mettle Update and have been a recurring feature since. 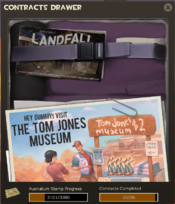 The first inclusion of the feature in the game was the Gun Mettle Campaign, a three-month event that introduced skill-based contracts that awarded one-of-a-kind weapon skins and exclusive weapons cases. Participation in the event required purchase of a premium Gun Mettle Campaign Pass, which would be converted into a Gravel Gun Mettle Campaign Coin upon usage. This Campaign Pass was not available for sale during the last month of the event. It introduced Contracts, Contracts Points, objectives and advanced objectives. Contracts dropped at a rate of 2 Contracts for every week of the Campaign, appearing in the player's Contracts drawer (pictured at left), which could hold up to two Contracts at a time. This Contracts drawer system was reused in the next few Campaigns. 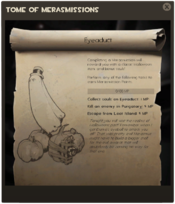 Next, the Jungle Inferno Update was published with its own premium Contract campaign of the same name also requiring a Campaign Pass, along with the separate free Pyroland Contracts that awarded the new weapons added in the update. A week after the opening of the Campaign, Scream Fortress 2017 commenced the Halloween Contracts, which were a new set of Contracts that again awarded Halloween Cosmetic items and were again counted as Merasmissions on the Soul Gargoyle. All of these Contracts were accessed through the new ConTracker device introduced in this Campaign, which is a replacement of the previous Contracts drawer. The Campaign also introduced Blood Money and the Mercenary Park Gift Shop as an additional reward system, as well as Friendly-Fire, a way for players to help each other with completing Contracts. Though the event has ended, players still have an opportunity to complete contracts. Players who purchased the Campaign Pass may continue to work on the Mercenary Park contracts and earn the rewards with no penalty; and the Contracts Pass is available for those who had not purchased the Campaign Pass during the event. Players can only use the Contracts Pass if they had not used the Campaign Pass. The Contracts Pass still awards the ConTracker to the player as if they had bought the Campaign Pass during the event. The Pyroland Contracts also remain active; however the items awarded by those Contracts are now also available through the Item drop system.

Other events had features similar to Contract Campaigns, but had no Contracts: