From Team Fortress Wiki
Jump to: navigation, search
This article is for content released in the update. For the patch itself, see October 20, 2017 Patch. 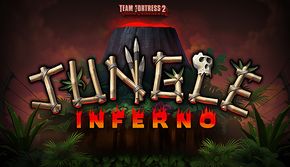 The Jungle Inferno Update was a major update for Team Fortress 2 that spanned throughout 4 days, starting on October 16th, 2017 and finally releasing on October 20th, 2017 after a 1-day delay. It introduced 5 new weapons, 5 new community-made maps, 1 new Valve-made map, 7 new taunts, 1 new kill taunt, 49 new cosmetics (though 4 all-class items are currently unreleased), and many rebalances for existing weapons as well as the Pyro class. It also introduced an overhaul to the contract system with the ConTracker, and introduced War Paint in place of weapon skins.

The Jungle Inferno Update was released over time through a four-day update.

Day 2 revealed the Jungle Inferno Campaign and War Paint cases that replaced campaign weapon drops and weapon cases, 2 new cosmetic cases, and the new campaign system. This campaign involves 36 new contracts that can be completed in co-op. Completion of the contracts earns either a campaign-specific item or "Blood Money", which can be used to buy War Paints and cases.

The Jungle Inferno Campaign required the purchase of a Jungle Inferno Campaign Pass. The ConTracker PDA was also introduced, which allows customized contract progression and access to the Mercenary Park Gift Shop. Friendly-Fire is a new feature accompanied by the campaign and the party system, which allows players to play with/against their friends and help each other in completing contracts if they are on the same Valve server with them.

Day 3 revealed 4 new weapons for the Pyro, a kill taunt for one of the new Pyro weapons (the Thermal Thruster), a lunchbox item for the Heavy, and changes to the flamethrower.

Day 4 released the patch notes for the Jungle Inferno Update, including various weapon changes, information about the new weapons, multiple bug fixes and changes to the matchmaking system. It also introduced the first-person inspection mechanic to all weapons.