The ConTracker is a Main Menu contract-tracking application that may be started by clicking the ConTracker icon on the Main Menu or by using the premium Jungle Inferno ConTracker Backpack Item to "View Contracts". The HUD may also indicate to the player which key to press to open the ConTracker to activate or turn in Contracts.

When started from either the Main Menu, the HUD, or from the Jungle Inferno ConTracker item in the user's Backpack, the root menu of the ConTracker shows all contract sets that are active at that time.

ConTracker PDA navigation chart for Pyroland Contracts, here showing a mix of (from upper left to lower right) fully completed, partially completed, unlocked, and locked Contracts. The orange ping indicates that "The Gas Passer" is the Activated Contract. The path to "The Hot Hand" is still locked because the Primary Objective of "The Thermal Thruster" has not been completed.

Players use the ConTracker to navigate and chose Contracts to activate.

Each contract has a Primary Objective and up to two Bonus Objectives. Each Objective defines the required action for the Objective and the Contract Points (CP) awarded for performing the action. Contracts may be turned in after completing one or more of these Objectives.

There are a number of different types of Objectives:

ConTracker HUD message that the 3 starred Contract may be turned in after the current round is finished.

Players may make progress on their Contracts in Casual matches.

Players use the ConTracker to turn-in Contracts with completed Objectives.

Rewards for turning in Contracts include the following:

Contract Stars is currency awarded to players who complete Primary or Bonus Objectives, one Contract Star per Objective completed. They are used to unlock other Contracts. Contract Stars are limited unlocking Contracts in the Campaign in which they were earned, and are unable to be used on other Campaigns.

Blood Money are currency awarded to players who complete certain Primary Objectives. If Blood Money is listed as a reward for a Contract, the player receives the listed amount when the Contract is turned in with the Primary Objective completed. Blood Money may be used to purchase certain items, e.g., merchandise available in the Mercenary Park Gift Shop.

Indicated on the ConTracker by crate icons, some Contracts award an item when completed. Such items include, possibly, Action items (example: Halloween Package), weapons (Second Banana for example), Cosmetic Items (some available only through contracts), or keyless crates (which may contain random items, e.g., War Paint). 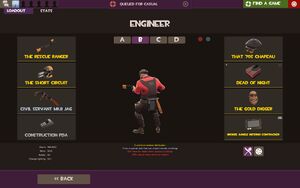 A RED Engineer with a Gravel ConTracker, despite a Bronze ConTracker being equipped