War Paint is an item type that was added in the Jungle Inferno Update to replace campaign weapon drops and weapon cases, and was first showcased on ​Day 2 of the update. When a War Paint is selected, it can be previewed on a weapon and applied to create a new unique weapon with the selected pattern. War Paint and War Painted weapons have the Decorated quality, but can also be obtained in Strange or Unusual qualities.

War Paints listed on the Steam Community Market can be previewed by selecting the "Inspect in Game..." option located within the tab displayed when hovering over a listed War Paint. Selecting this option will open the in-game War Paint Loadout menu, with the chosen War Paint's pattern variation automatically entered; thus allowing the player to preview its design on all applicable weapons. 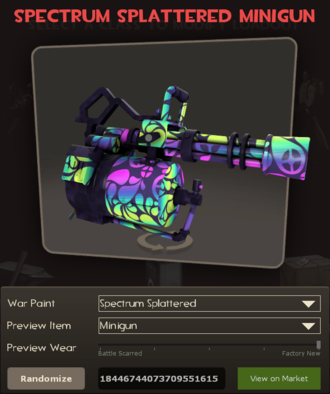 This is an Airwolf War Paint Knife, Battle Scarred, in the War Paint Section of the Loadout Menu.

War Paints can be applied to any compatible weapons within the Loadout Menu. These cannot be given at the user's discretion, but can be bought if available on the Community Market. War Paints can be randomized as to generate pattern variations or can be manually selected. This Loadout for War Paints resembles the Loadout Menu choice used to select a War Paint for a weapon when redeeming a War Paint. Also they come in different exteriors, which are: Factory New, Minimal Wear, Field-Tested, Well-Worn, and Battle Scarred.