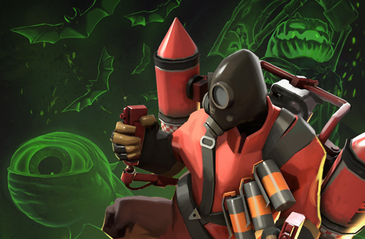 This article is for content released in the update. For the patch itself, see October 26, 2017 Patch.

Scream Fortress IX (or Scream Fortress 2017) was a Halloween event and a major update released with the October 26, 2017 Patch. It introduced Halloween Contracts that were free for all players and were accessed via the ConTracker. In addition to this, all Halloween maps from the previous Scream Fortress events were activated (except for the Mann vs. Machine map, Ghost Town).

On October 27, 2017 Patch the Case Global Unusual Effects were updated to draw from a pool of previous years' Halloween Unusual effects during the event.

On October 31, 2017 Patch the Taunt Unusualifiers were updated to draw from a pool of previous years' Halloween Unusual effects during the event.

​This set encouraged and rewarded exploration of all Halloween maps, with exception on Ghost Town, confrontation of all boss challenges, and exercise of all current Halloween map features, including Halloween pumpkins, pumpkin bombs, magic spells, bumper cars, and Underworlds.

Three of these Contracts were dedicated to defeating bosses, seven to the released community Halloween maps of previous years, and six to the Valve-made Halloween maps. Additionally, there is a "Start" contract, which could be completed on any map within Casual Mode.