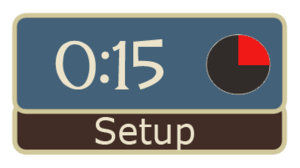 The HUD panel that appears, displaying setup time, before changing to display the current round time.

Setup time, commonly Setup, is the interval where the round has begun but the game clock has not started and certain gates are closed and locked, restricting contact between the teams. Setup time follows, but excludes, the "waiting for players" interval that happens after a map loads. The beginning of Setup resets all player conditions and charges, but does not reset Dominations from an immediately preceding round.

This Setup time allows teams to make certain preparations before contact, including Overhealing, building Medic charges, and constructing Buildings, although on most Payload and Attack/Defend Control Point maps, attacking BLU Engineers are restricted from building during Setup. Setup allows all players extra time to chat plans and change classes, weapons, and Contracts. Also on Payload and Attack/Defend Control Point maps, the time permits defending Demomen to set Sticky traps and other classes to get to particular positions that may take some time to reach.

Setup time typically lasts 60 seconds, but some maps, such as Thunder Mountain, have an extended Setup time, while Well (Control Point) has only 45 seconds of Setup time and Hightower's Setup time is so short as to be practically non-existent.

During Setup time, Medic's Medi Guns charge at an increased rate that does not slow when the target is fully Overhealed. Engineer's Wrenches build twice as fast per swing during Setup.

In general, Setup time permits the offensive/defensive play of certain maps to begin immediately as the gates open; Payload teams have to fight for control of the Cart from the very start, and the fight to get to the first defended control point begins at BLU Spawn. In certain Payload Race maps, both sides get an equal opportunity Setup to pre-construct Buildings. As such, activities during Setup time can significantly influence round outcome.

Setup time is different from the control point lock at the start of Arena and King of the Hill games, where the single control point is locked from capture for a short amount of time; but otherwise, players may move freely, build, or kill each other. In these games, Medics and Engineers expressly do not have a safe time to prepare.

Maps that use Setup time