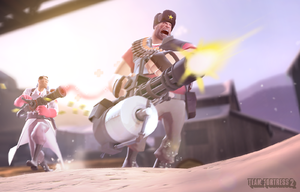 Healing is an ability primarily possessed by the Medic class while using his Medi Gun, Kritzkrieg, Quick-Fix, or Vaccinator. By training his healing beam on an ally (or a disguised enemy Spy), the Medic can actively restore the player's health. In addition to restoring health, healing also enables the Medic to fill up his ÜberCharge bar. The Medic cannot heal buildings, which must be repaired using an Engineer's melee weapon, such as the Wrench.

A Medic's healing rate is linearly based upon how long ago the target was last damaged. If the target was damaged less than 10 seconds ago, then they are healed at the normal rate of 24 health per second. From 10 to 15 seconds, this rate increases linearly from 24 up to a maximum of 72 health per second. This mechanic is in place to encourage falling back to heal, as without the boosted healing rate, players often found that fighting, dying, and respawning was quicker than falling back, being healed to full, then re-engaging.[1]

This graph shows how Medic's healing rate changes for different mediguns based on how long it has been since his target last took damage.

ÜberCharge building rate is halved if the target is at 142.5% health or above. If more than one Medic is healing the target, charge building speed is divided by a factor of the number of Medics healing that target.[2] Dispensers and Payload Carts also reduce the charge rate when healing the same target.

An overheal (commonly referred to as a "buff") indicates a player's health is up to 150% above their maximum HP (half of the player's normal health added on). Medics can overheal players with any secondary healing tool except for the Quick-Fix, which can only overheal up to 125%. The player's health cross on the HUD will glow more brightly as they are more overhealed. A particle effect consisting of small team-colored health symbols will surround an overhealed player. The Hatless Update increased the size of the overheal symbols.

A full overheal will fade away in exactly 15 seconds for all classes, provided that the player does not take additional damage. While the Heavy's health can be boosted to 450, it will return to its base of 300 in the same time as the Scout, whose health can be boosted from 125 to 185. If the Medic heals a player already at 100% health, it will take 1 to 3 seconds to raise them to 150% health (overhealed). Classes with higher base maximum health take longer to fully overheal.

A Heavy wielding the Fists of Steel has 40% less maximum overheal, while a Sniper wearing the Razorback can't be overhealed.

During setup time, or while approaching an objective, a Medic can keep multiple teammates on the front line overhealed instead of only their primary healing target. This also increases the speed at which the ÜberCharge bar rises (ÜberCharge rate is not affected during setup time).

Overheal will be retained if a player is being healed by a Quick-Fix.